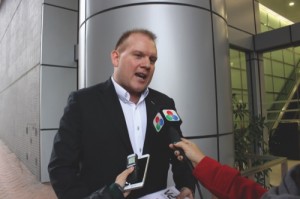 Much was my surprise when I saw my daily copy of Macau Daily Times on the last day of 2014. “Person of the Year” – me?? Wow, that was totally unexpected…
I’m not often lost for words, but kind of am now. That’s really nice to be acknowledged, it’s kind of incredible. But this accolade really belongs to each and every one of the over 4,600 members of Macau Taxi Driver Shame. Well done to the people of Macau for having rallied around this cause originally sparked off by Mr Sloane Jorba’s totally justified anti-fishing taxi rant on 30 June. After Sloane sparked the match, the taxi issue was picked up by many more and ever since has burned brightly in the Macau media and as a talking point across all sections of Macau society. Macau citizens are often accused of self-interest and lethargy, but MTDS has shown that the people of Macau do care about their city and how it is perceived, and that they can rally around a worthy cause.
This is now a major issue in Macau. It won’t be easy to fix, but I think in the last six months the Macau Taxi Driver Shame Facebook group and the Macau Taxi Passengers Association (www.853taxi.org) has achieved a lot and through 2015 we will keep pushing more initiatives to hopefully get it resolved. It took us years to get into this mess, and it may take many more months, even a year or two more to get out of it, but the sooner we start the sooner it gets done.
Hopefully in 2015 the Macau Police and Macau Government (through the new Secretary for Transport and Public Works, Mr Raimundo do Rosario and DSAT) genuinely support us in this cause, which is really a cause for all of Macau, whether you use taxis or not. The taxi industry touches all who visit Macau, millions and millions of people, and it reflects on our great city of Macau. Do we want to be seen as a nation of scammers, cheaters and liars? Or do we want to be seen as a happy, welcoming place. That is the real issue here.