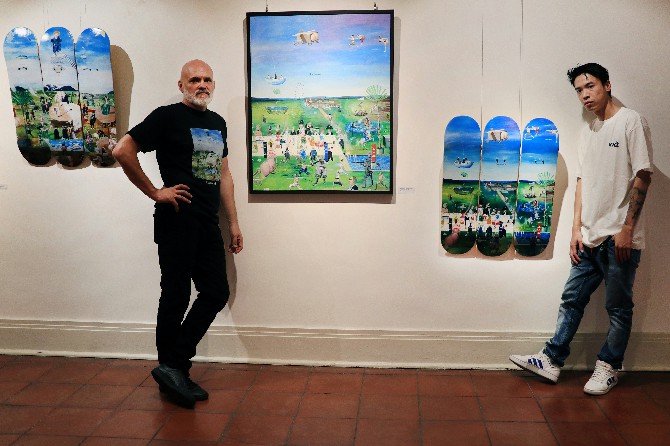 The man behind local skate and snowboard shop EXIT, Jolian Chan, and the famous artist Konstantin Bessmertny have joined forces to present a new concept that aims to carry art further into the daily lives of people in Macau and beyond.
EXIT from EXIT is the name of the new project which, besides presenting art on skateboards, also includes merchandise products such as a t-shirt line.
To learn more about this new collaborative project, the Times spoke to Chan and Bessmertny in an exclusive interview.
“One day I woke up and I was thinking that I have been selling a lot of skateboards from US and European brands and I thought, why don’t I just create a brand and sell my own [products],” Chan said, explaining that he then realized that he was missing an essential part – the design.
“I immediately remembered Konstantin [Bessmertny], who I’ve known for a long time, so I texted him and we arranged to have lunch the next day, where he brought with him some ideas from his artworks. I saw them and I realized it was a great idea as they were perfect for the purpose. We immediately started to think how to do it and how to divide [the art pieces] in three parts to fit three skateboards. The idea was so quick to develop,” Chan remarked.
Bessmertny recalled that at the beginning of his career he studied graphic design and over the years he’d always had this skill ready as a “Plan B” for the difficult times where it is difficult to live from just art.
“I still do this when I need to and get to do design and interior design for some projects [as a way to make a living]. I also collaborate in books and catalogs,” Bessmertny said, adding, “My main obsession is art but whenever something smart and clever comes around or you meet someone that has different energy, it’s much better – as one can put their energy into the production and other aspects. When we meet the right person at the right time [things happen fast].”
Although not a skater himself, Bessmertny revealed that both his son and daughter had an interest in the sport and he had helped them assemble their first skateboards so he knew the equipment and how it worked, which also came as an advantage to the fast progress of putting the ideas into practice.
“As we did not have much time, we chose to go for a replication of existing artworks, using prints of them in the products. However, I may still do something special and specifically handmade for this project,” Bessmertny said, recalling that the project also came to fulfill a long-time idea from his wife, who had suggested that he develop other kinds of ideas and applications for his paintings.
“In Hong Kong, I have done some sets of plates for companies [with an aim] to bring meaningful art (not design) into everyday life. I think that’s my obsession. You are eating from a plate but while you are finishing the food you can see the artwork appearing in the background. […] I like those things,” the artist said.
“I am sure that even kids looking at these skateboards will probably not understand the meaning at the beginning but they might feel curious about it and I hope it will trigger them to open the book [where the ideas came from] and understand a little about the ‘Grobianus in Grobiania’ [the title of the paintings involved in the project].”
For Chan, the pandemic has contributed to this project as he had more time to explore new ideas. Bessmertny’s work also comes from the first few months of the Covid-19 pandemic, when most people were advised to avoid going out and having social interactions with other people.
“Although everyone’s business is going down or at least not as good as before, having some new ideas [during this period] is good and will help us build up a form of resilience,” Chan said, noting that for him it was an opportunity to rethink his business and to start over in the form of a new brand.
“This is not just a collaboration between EXIT and Konstantin Bessmertny. This is a completely new project and brand, called EXIT from EXIT. This will be the brand-name for boards, shirts and other products in the future. So I think [the pandemic] was a good chance for us to start a new brand,” Chan said, adding, “It is normal to always stay in your comfort zone when all is well, which is precisely the idea behind the EXIT motto – Be Bold to Exit – which means to get out your comfort zone. If you have a good business, you tend to only think about the operation and stop thinking about something new.”
As for new ideas coming from this work, Bessmertny said, “I want to do more things. I want people walking on the streets to see my work and to think or express something about it – not just design but interactive design. We will do more of our brainstorming meetings and we will for sure come up with new ideas.”
As they also told the Times, the public reception could not have been better as the products available for sale are already sold out.
“They were all gone. We sold out in three days. This was a very good response. For the time being, we have only the t-shirts available,” Chan concluded, saying that more and new products will become available soon.
The collaborative project is on display at Bessmertny’s latest exhibition, titled “Intermission,” and will remain on display at Macau Military Club’s Comendador Ho Yin Gallery until November 29.