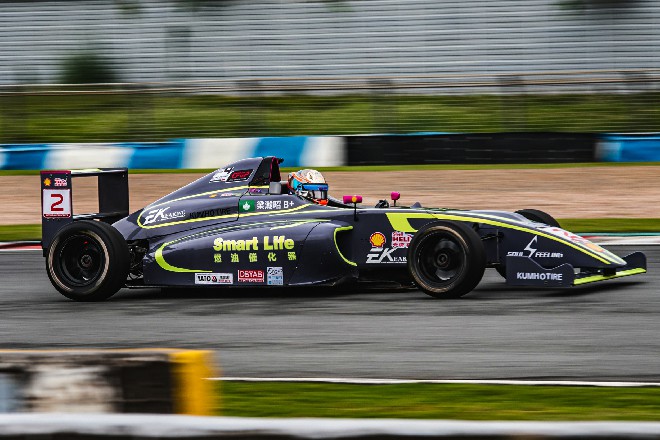 Macau racers Charles Leong (Smart Life) and Andy Chang (Chengdu Tianfu International Circuit) topped the podiums of all four races of the Chinese Formula 4 (F4) category held over the last two days at the Zhuhai International Circuit (ZIC).
The experienced Macau racers did not take part in the first four rounds of the championship held on September 19 and 20 but made an appearance during rounds 5 to 8 of the competition, anticipating their participation in the Macau Grand Prix event in November.
With more experience and driving skills than most of the field participating in the F4 China event, the two local drivers unsurprisingly showed up on the top step of the podium, a highlight for Leong, who won three of the four races held on October 7 and 8.
Unfortunately, the winning streak was interrupted in the final race of the event when Leong was involved in an accident with the other three drivers, exiting the race at an early stage.
Out of the driving seat for too long, Chang started the event less competitively, having to adjust to a completely new car with which he was not familiar, but ended up exhibiting a fast ascent in form from day 1 to day 2.
On Wednesday, things did not run so smoothly for Chang who, after taking only sixth-best position in the first race, did not finish the second.
But his luck changed yesterday, with the racer scoring his first podium, finishing the third race in the third position, right behind Leong and his Smart Life teammate He Zijian.
Taking advantage of the 4-car crash that left Leong out of the last race at an early stage, Chang took the win in the final race of the ZIC event, leaving a favorable impression ahead of the upcoming two rounds, which will be disputed at the local Grand Prix on November 21 and 22.