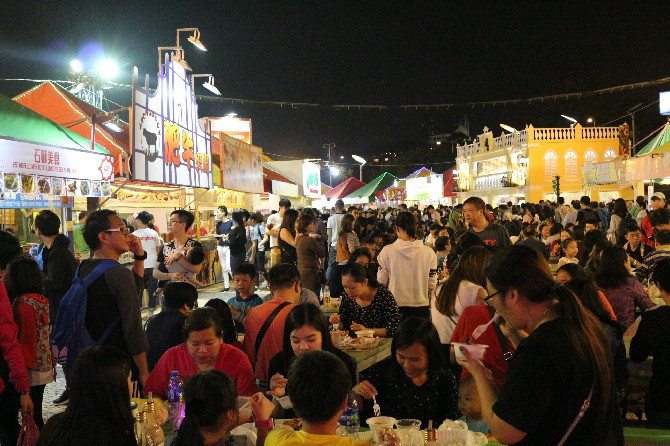 The annual Macau Food Festival will return in November for its 20th edition, with a smaller scale and special measures amid the Covid-19 pandemic, Chan Chak Mo, president of the festival’s organizing committee disclosed.
Hosted by the United Association of Food and Beverage Merchants of Macao, the festival’s first merchant briefing session was held yesterday. The session attracted 194 registrants, of which 184 were present when the session commenced.
The organizing committee revealed that a total of 102 merchants were first-timers at both the festival and the briefing session. This amounted to an approximate 10% increase over last year.
Chan could not estimate how many of them would register to participate in the festival, clarifying that the situation usually gets clearer at the second briefing session.
The registration period for caterers has started and will be open until October 5.
Chan disclosed during the session that this year’s festival would set a lower quota on the number of participating caterers. Chan recalled that there were about 150 booths last year, while this year, there will be a maximum of just 110 booths.
Shrinking the lineup was a way to follow the government’s guidelines on Covid-19. By setting up fewer booths, each booth will be able to adhere to social distancing requirements.
This year’s festival will be in the same area as last year’s. Chan stressed that both the square opposite the Macau Tower and the leisure area adjacent to the Sai Van Lake would be used.
In previous editions of the Food Festival, caterers were invited to participate in the event from other jurisdictions such as mainland China, Hong Kong and Malaysia. However, this year only local caterers will participate. With current immigration measures still being stricter than normal, Chan explained that the association has called off the idea of inviting non-local caterers to participate in the event this year.
With these changes considered, Chan declined to speculate on the change in revenue of this year’s festival, especially since tourist arrivals from the mainland are only just restarting.
Furthermore, other ongoing epidemic measures will be in place unless the health authorities advise otherwise. Chan expects that the health code and body temperature measurements will be required upon entry.
Among the new health guidelines for this year’s event is the requirement that dining tables be set up apart from one another. The organizing committee also hopes to maintain a maximum of four diners at one table. Moreover, there would be a separate entrance and exit in order to avoid crowds gathering.
Also impacted by social distancing requirements is the opening ceremony, which will be cancelled this year.
Participating vendors are subject to several requirements in order to join the festival. Chan said that the requirements this year would be more or less the same as those enacted in previous editions, as they have proven effective.
One such requirement dictates that participating merchants must sell food items already on their menus, meaning that they cannot sell special items at the festival which are not otherwise sold at their shops.
This is to avoid disappointing diners. “We don’t want to see diners having tasted something good at the festival and returning to the restaurant but not [being] able to find it,” Chan explained.
The owner of a western-style restaurant, surnamed Wong, told the media that she forecasts residents will be more cautious when spending, therefore she did not expect to make significant revenue during the upcoming festival.
In addition to that, she was concerned about the requirement on provision of alcohol rub at the booth. Since her establishment needs to cook on open fire, she fears its use may cause a risk of fire or explosion.
This year’s Macau Food Festival will be held between November 13 and 29 for a total of 17 days at the Largo da Torre de Macau. The event will operate between 5 p.m. and 11 p.m. on weekdays, as well as between 3 p.m. and midnight on weekends.