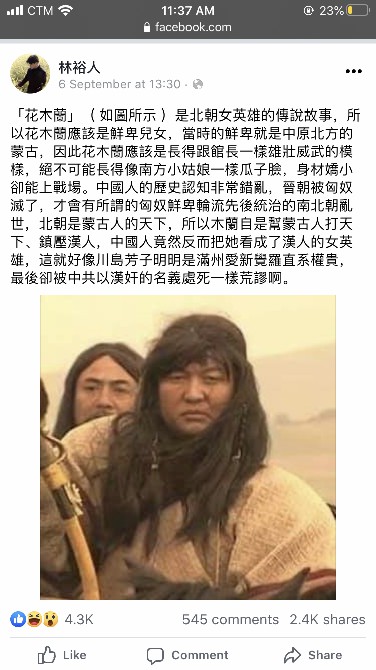 A participant in last year’s 2019 Miss Macau pageant faced hundreds of comments online mocking her knowledge about history after she reposted a comment about Hollywood movie “Mulan.”
The pageant participant being criticized is Dinelle Wong, who placed third in Miss Macau 2019. The original post was written by a user with the name of Lin Yu-Ren.
On September 6, Lin wrote on his Facebook page that the real Mulan comes from a Mongolian ethnic background and had physical features different from those of actress Liu Yifei, who played the character in the recent movie.
“It is absolutely impossible for Mulan to look like a southern girl who can fight in the war with a small body,” the post reads.
In the same paragraph, the film is scrutinized and accused of interpreting history wrongly.
The next day, Dinelle Wong posted a screenshot of the post on her Instagram accompanied by the comment, “My knowledge improved.” Aside from that, Wong did not make any other remarks about Lin’s post or the movie. However, despite the fact that Wong’s opinions on this topic remain unclear, some mainland netizens condemned her.
A Weibo account with over 2.3 million followers, which only uploads patriotic content, made a post featuring Wong’s Instagram feed along with the comment “former bronze winner of Miss Macau uses ‘Mulan’ to mock Chinese.” The Weibo account is verified as belonging to a military affairs blogger and translator, and only makes posts related to politics.
As of 6 p.m. Wednesday, the post has received over 2,100 likes and 400 comments.
One of the top comments recommends the country place more effort on directing the soft power trend in Taiwan, Hong Kong and Macau. The same commenter wrote, “Studying in Taiwan, the U.K. and Australia was the trend ten years ago and many roots [students] are now crooked consequently.” The commenter is likely referring to Wong’s exchange study in Britain and other western countries.
“A knowledge-blind pretends to be knowledgeable,” one user commented.
While most of the comments deplored Wong’s post, some remained calm and spoke from the opposite perspective. “She is disagreeing with the post. She was being sarcastic with her remark. Comment after you read her post,” one user said, defending Wong.
Unlike most of the people who were debating about or abhorring Wong’s post, one Weibo user said that the film was merely “an artistic expression, not a copy of history” and that Liu was a proper choice for a role that requires fighting.