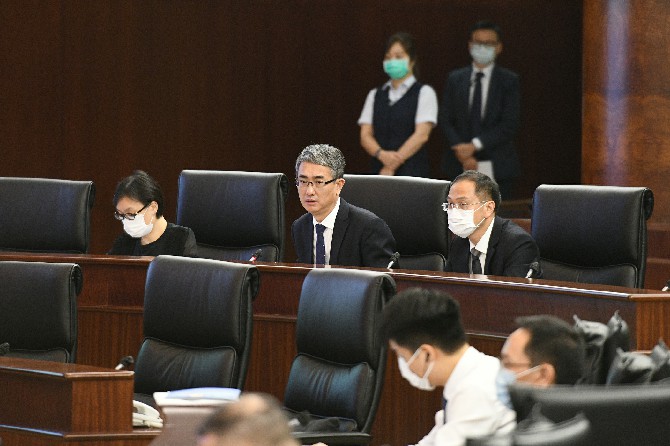 Lawmaker Mak Soi Kun has suggested that adopting a planned economy model in the communist style may be a way out of Macau’s current economic pain.
During yesterday’s Legislative Assembly (AL) plenary meeting, various lawmakers raised concerns about Macau’s economic recovery.
Mak, who is also a stakeholder in the small and medium-sized enterprises (SMEs) sector, shared his opinion on the topic, indicating that a centralized planned economy may be the solution to Macau’s recovery and its current economic difficulties.
“After the Second World War, communist planned economies recovered first, then capitalist ones. Because of the planned economy, [the government] redistributed the resources,” said Mak. The lawmaker believes that the local government has contracted “all resources to the big companies,” so Macau cannot execute on a planned economy.
Mak wants the government to protect local SMEs and to launch more government public projects for the SMEs to build or participate in.
Lawmaker Wang Sai Man hopes that the local government continues expanding financial support for local SMEs, including launching a new round of e-vouchers and granting the companies bigger loans.
“It will not be a surprise to see another round of business closures if the economy does not recover after Christmas and next year’s Spring Festival,” said Wang.
Secretary for Economy and Finance Lei Wai Nong revealed that, as of last Tuesday, the local government had received more than 11,800 applications from SMEs asking for bank loan interest subsidies. The government approved 80% of these applications.
Lawmaker Ho Ion Sang is urging the local government to enhance the promotion of Macau tourism, negotiate with mainland authorities regarding travel permit issuing procedures, and to extend the validity period of Covid-19 tests from seven to 14 days.
Lawmaker Fong Ka Chio, who is also an expert in tourism management, pointed out that Macau should pay attention to its recent visitor arrival statistics.
Information from the Statistics and Census Service showed that the number of visitor arrivals surged by 97.7% month-to-month to 449,085 in September 2020.
In terms of the source of visitors, the number of mainland visitors fell by 78.6% year-on-year to 412,451. Those travelling under the Individual Visit Scheme (IVS) totaled 90,100, with 91.9% of them coming from Guangdong Province.
Responding to the lawmakers, Lei said that he hopes the economy recovers gradually.
According to Lei, Macau’s economic recovery does not lie in the hands of the market, but is a matter of government policy. As of today, Macau has already recorded over 190,000 registrations of hotel coupons. Lei thinks that the hotel coupon program is worth continuing.
“In light of the current situation, we can’t resume the free movement of tourists like before,” said Lei. “If any [outbreak] situation occurs, it will be more difficult for Macau to reopen this time.”
The secretary also revealed that the local government is preparing to contract public engineering projects worth 18.5 billion patacas to local companies in 2021.
In addition, the Macau government is negotiating with the mainland government on a Hengqin-Macau joint tourism campaign.
The secretary also hopes that Hong Kong will be able to overcome the pandemic, as Macau’s visitors normally prefer travel to Macau and Hong Kong together.