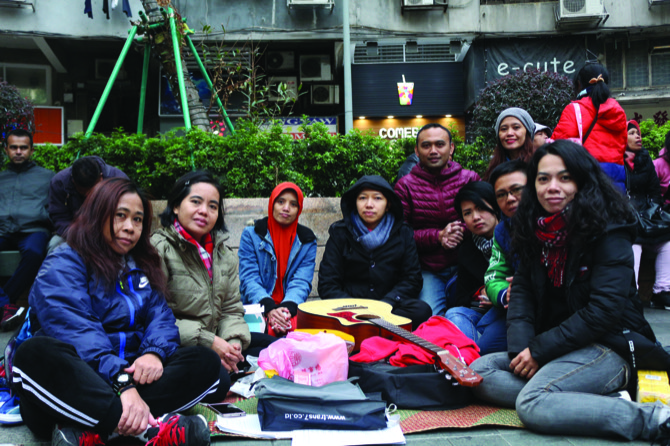 Indonesian migrants in the SAR are raising funds for the victims of this week’s tsunamis, in a show of solidarity.

Members of the Indonesian Migrant Workers Union roamed the streets of Avenida do Almeida Lacerda and Avenida de Horta e Costa yesterday, while others remained at Three Lamps Square, asking the public for donations for victims of the tsunami that hit the coastlines of west Java and Sumatra, Indonesia.

For the migrant workers living in the region, raising funds to send back home is one of ways to show solidarity and remembrance.

“We’re fundraising today with the hope that it can help our compatriots back home. This is our way of showing solidarity with them,” said Roi Solikin, a member of IMWU.

“We also held a fundraising campaign in September when an earthquake-tsunami occurred in Sulawesi island and we still have some MOP20,000  remaining that we could send, along with the funds that will be raised today,” said the migrant worker.

According to Solikin, the funds were raised by Indonesian migrant groups and other private individuals.

The funds will be sent to different organizations in Indonesia, depending on their needs.

“We do not send [the funds] all at once because we collaborate with different needs back home. So we do this step by step. […] We have different networks and alliances, so we all work together,” Solikin explained.

According to IMWU, the association is not expecting to raise a significant amount of funds, yet stressed that they are all working together voluntarily to raise money more efficiently.

Although the association has no members with families affected by the two tsunamis, one member recalled that her family was a victim of the devastating earthquake-tsunami that occurred in September, which left over 2,000 dead in Palu on Sulawesi island.

“[Six of] my family members, including my parents, had to evacuate, bringing nothing with them when the incident happened,” said Mikha Elis.

“We had nothing left. My parents could not bring anything but themselves because the incident happened really fast. Even our house was wrecked,” the migrant worker recalled.

Although it has been three months since the natural disaster occurred, the migrant worker said that her family is still staying in a camp, along with others who evacuated and lost their homes.

“They are not in perfect condition now, but little by little they are making progress. I have sent money to them and we also talked to different [migrant groups] to ask for assistance,” she explained.