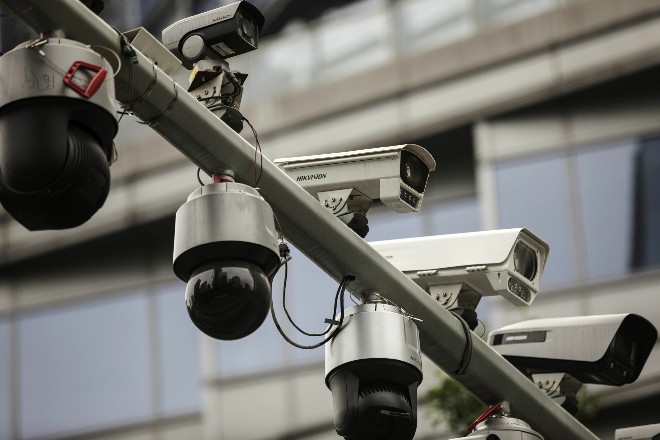 Secretary for Security Wong Sio Chak has given an update on the increase in the number of CCTV surveillance cameras and on developments toward the resumption of border crossings.
Yesterday, Wong, together with other high-ranking officials from the security force, met with the First Standing Committee of Legislative Assembly to respond to lawmakers’ questions on the legal amendment establishing extra compensation for human resources in the security force.
On the sidelines of the meeting, Leong Man Cheong, commissioner of the Public Security Police Force (PSP), revealed that a total of 980 surveillance cameras will be installed by 2022, with 300 in one phase and 680 in additional phases.
This batch of cameras will cover spots missed by the existing surveillance devices. These new surveillance tools will be distributed throughout the New Urban Zone and at border facilities.
According to Wong, surveillance cameras have helped the police force solve more crimes. “Don’t think that nobody sees [your crime]. The cameras do,” said Wong, praising the surveillance system.
With regard to the facial recognition function of CCTV surveillance cameras, which the government has decided to adopt, Leong claimed that the security force will publicize the test report once it is completed.
The SAR government will select 100 cameras: 50 for facial recognition and 50 for car-plate recognition.
Aside from the controversial public surveillance network matter, the security force has been in constant communication with the mainland government authority regarding the resumption of ordinary border crossings.
The immigration measures “will gradually [return] to old [conditions],” according to Wong. The SAR government is coordinating with the central government in all mainland provinces regarding the resumption of tourism travel permits to the Macau SAR.
Recently, there has been gradual recovery in the parallel trader situation as local residents and non-local workers have been allowed to travel between Zhuhai and Macau.
Vong Man Chong, director of the Macao Customs Service, acknowledged that parallel traders mostly transport legal goods to mainland China. He indicated that such trade is legal in Macau but maybe illegal in Mainland China. Parallel traders normally receive purchase orders from mainland China. The traders buy the products in Macau, then take them to Zhuhai to ship to other mainland cities.
The Secretary urged parallel traders to cooperate with the government’s Covid-19 prevention measures.
Meanwhile, regarding the law being discussed at the First Standing Committee, Ho Ion Sang, chairman of the committee, told the press that it mostly concerns the methods for calculating working hours among the human resources of the security force.
Due to the special nature of the work of the security force officers, their working hours cannot be calculated in accordance with current regulations. These officers include criminal investigators from the Judiciary Police, firefighters from the Fire Services Bureau, customs officers, prison police officers, and police personnel of the PSP.
Three of the existing administrative regulations, including No.13/2005, suggest that a civil servant is only eligible for additional compensation should the concerned individual work over 44 hours for four consecutive weeks within a month.
The security authority’s statistics show that, on average, customs officers work 45 to 46 hours per week, and firefighters work more than 48 hours per week.
Under the new amendment’s prescription, the government will calculate the aforementioned personnel’s working hours differently. Their average weekly working hours will be their monthly duty hours divided by the number of working days and then multiplied by five. The number of working days is the same as that of other civil servants. Officers will be eligible for additional compensation should the personnel work more than 44 hours per week based on this new calculation method.