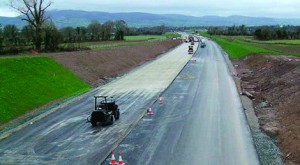 The government of Mozambique plans to pave about 2,100 kilometers of national and regional roads by 2019, according to the 2015-2019 Five-Year Plan, which will be voted on by the Mozambican parliament from the end of March.
The plan will entail asphalting an annual average of about 420 kms of roads, down by about 180 kms compared to last year, when 602 kms of national and regional roads were paved, according to the plan.
At the same time the government plans to repair almost 2,800 kms of roads, an annual average of 560 kms, almost double the rate recorded in 2014 of 283 kms.
The government’s plan outlines construction, repair and maintenance of 57 bridges, along with routine maintenance of 20,000 kms of roads and periodic maintenance of 5,000 kms.
According to the Integrated Program of the Ministry of Development Planning and Investment (MPD), revised in June 2014, the country’s road network spans approximately 30,000 kms including primary, secondary, tertiary and side roads.
The primary road network (5,971 kms) has 4,728 kms of paved and 1243 kms of unpaved roads, whilst the secondary network (4,915 kms) has only 838 kms paved and 4,078 kms unpaved.
The tertiary network (12,603 ​​kms) is the largest, but it is also less paved: 11,936 kms have no asphalt.
Among the priority projects for the expansion of the road network that are already in progress, the MPD noted the Catembe-Ponta do Ouro road with Chinese funding of US$725.8 million, which includes construction of the Maputo-Catembe suspension bridge.
The N6 road repair projects, between Machipanda and Beira, in the provinces of Manica and Sofala also has funding from China (USD433 million) as does the Maputo Ring Road with a budget of US$298.84 million.
The ministry also noted the N13 road, in Niassa province, linking the towns of Cuamba, Mandimba and Lichinga, costing US$261 million will be financed by the African Development Bank and the Japan International Cooperation Agency.
These two organizations will also fund with 150.19 million dollars building the Nacala Corridor III road linking the towns of Much, Madimba and Lichinga in northern Mozambique.
Construction of the N104 road along the Nampula-Nametil section, has a cost of US$75.4 million, with funding from South Korea, while the rehabilitation of the road linking the towns of Tica, Buzi and Nova in the province of Sofala, is budgeted at US$149.72 million, with India as a financier.MDT/Macauhub