Mulan, once a sure thing, becomes a problem for Disney 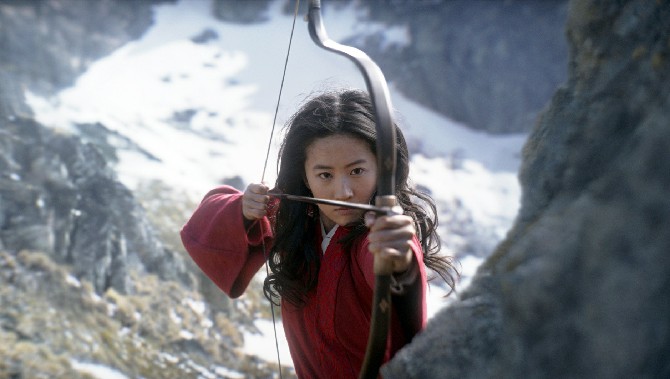 It was supposed to be another $1 billion blockbuster for Walt Disney Co. – a live-action remake of a 1998 animated hit featuring an all-star Asian cast, breathtaking cinematography and plenty of martial arts.
Instead, the new “Mulan” is proving to be a political hot potato, reflecting the U.S.’s fraying ties with China, and the choices companies face when operating in the highly politicized, but lucrative environment that is modern-day China.
The $200 million film, which was made available for purchase online in the U.S. and Europe last week and is set to open in China on Friday, has seen a string of controversies – all while the coronavirus knocked out its chances of getting a successful run in theaters.
An online boycott that began last year, when one of the stars spoke supportively of the crackdown on anti-China protesters in Hong Kong, has continued. Now, Disney is facing heat for filming in a part of China where the government has detained up to 1 million ethnic Uighurs in camps called “voluntary education centers,” and then thanking that region’s authorities in the movie’s credits.
Disney is the latest U.S. business to be embroiled in a political controversy involving China. Last year, the National Basketball Association was plunged into turmoil after a team manager tweeted in support of the Hong Kong demonstrators, triggering a backlash and a blackout of games in China. DreamWorks Animation’s movie “Abominable” stirred up a storm in Asia after the film featured a map reflecting China’s maritime claims disputed by its neighbors.

‘ADDICTED TO CHINA’
Senator Tom Cotton, a Republican from Arkansas, slammed Disney on Twitter Tuesday, saying the entertainment giant is “addicted to Chinese cash and will do just about anything to please the Communist Party.”
Disney has a lot at stake in China. The company spent $5.5 billion developing its Shanghai Disneyland resort and has been expanding its smaller park in Hong Kong. The movie market there is also on track to become the world’s largest. But with both Republicans and Democrats focusing on China trade and cultural issues leading up to the presidential election, the company could continue to find itself in the political crossfire.
“I wouldn’t be surprised if they’re called before Congress,” said Stanley Rosen, a political-science professor and specialist on China at the University of Southern California.

HIGH HOPES
It certainly didn’t begin this way when Disney started work on the film more than five years ago.
The company sought to address cultural and social concerns about the earlier picture, which featured Donny Osmond and Harvey Fierstein voicing Asian characters. For the new picture, they were replaced with a largely Chinese or Chinese-American cast, including Liu Yifei as the heroine who dresses as a male soldier to save her father, and Jet Li, as her emperor.
Disney chose a female director, New Zealander Niki Caro, because “she has a long tradition of going into very specific communities and telling a story,” said “Mulan” producer Jason Reed. He pointed to films she had done, such as “North Country,” about Minnesota iron miners, and “McFarland, USA,” about a Latino track team in California.
“Mulan,” which is based on a centuries-old Chinese folk song, incorporates traditional Chinese architecture, costumes and spirituality.
“We spent a great deal of time with scholars, consultants and various creative people really listening to how they look at the world,” Reed said.

CONTROVERSIAL COMMENTS
Then Liu, the film’s star, voiced her support for the mainland Chinese government during Hong Kong pro-democracy protests last year. A #BoycottMulan movement began trending on Twitter.
After the film’s release last Friday, others began to notice that the credits included thanks to local authorities in Xinjiang for letting the company film there. The region is where members of China’s Muslim minority are being held in camps as part of a crackdown that followed a series of Uighur attacks on civilians in 2013, including a flaming car attack in the heart of Beijing: Tiananmen Square.
International criticism has been building over the camps for several years, with the U.S. sanctioning officials from the region and European governments condemning the repression of Uighurs. China has sought to defend them by calling them “education” camps that Uighurs attend voluntarily, even though a visit to one last year showed dormitories featuring bars on the windows and doors that only lock from the outside.

MARKETING MUSCLE
The financial impact of the controversies on “Mulan” remains to be seen. The movie already faced a steep climb to profitability because so many theaters were closed by the coronavirus and Disney took the unusual step of releasing it online for $30 on its Disney+ streaming service.
The company also spent tens of millions of dollars marketing “Mulan,” over and above its production budget. Given the state of the movie-theater business, it will be tough to make back its investment.
Disney hasn’t released numbers on online purchases of the film, although data from third parties suggest there was a lot of interest. Box-office results from China, currently the world’s second-largest movie market, won’t be available until the weekend.
The bigger problems for “Mulan” could be ones that studios are more accustomed to: piracy, for example, because the movie is already available online. The reviews have also been less than unanimous – 76% of critics and 54% of the audience gave it a thumbs up, according to Rotten Tomatoes. MDT/Bloomberg