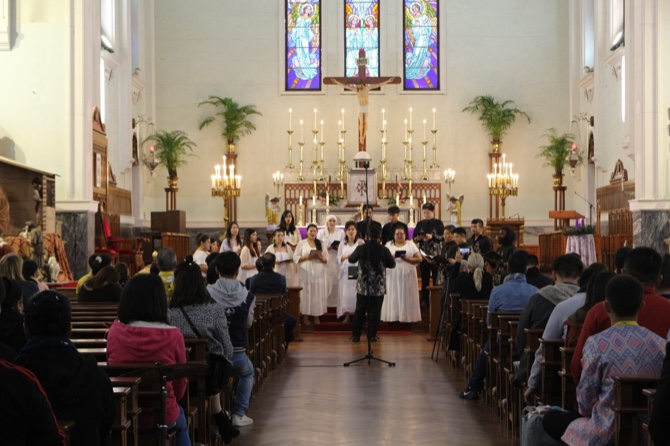 The third International Choir Festival of Macau (MIC) has attracted some 410 vocalists from 15 choirs representing eight different countries to perform in the region.

Themed “Harmony and Communion,” the annual festival concluded yesterday with a final performance at the Macau Cathedral and the participation of several choirs in a mass held at St. Lawrence Church.

According to the founding director of MIC, Barrie Briones, the number of participants has nearly doubled compared with last year, noting that they are aiming to further attract local audiences.

“Every year, we see an experience. Last year, it was only some 220 singers, but now we’ve doubled to 410 singers.”

“We do not have these kinds of festival in Macau, so I thought that since I hosted similar festivals back then in the Philippines, I thought why don’t we do it here as well?” Briones explained.

The organizer noted that this year’s festival is its largest yet.

Briones recalled that during its first year, only seven choirs performed during the four-day festival.

“I have a lot of friends who are conductors, as I was a conductor back in the Philippines. So I invited my friends and they invited others, so we’ve seen a growth in the number of the choirs that are participating,” said the founding director.

Held over four days, the opening concert took place at the Cathedral Church, while a Grand Concert was held at Cineteatro de Macau on Saturday. Aside from performing in churches and at the cinema, the groups also held impromptu performances on the streets.

Interviewed by the Times, some participants are looking forward to come back for next year’s edition. “We had fun overall. I really learned so much [and] it helped us improve as a choir overall. So far, it’s been very helpful for us and we’ve learned a lot here. [It’s my] first time [in] the festival,” said a participant from Malaysia’s Bave Chamber Choir, Dillon Khoo.

“Hopefully, we can come back because we really grew very close [to one another],” Khoo added.

Meanwhile, another participant, Kelly Chin said, “It has been really fun, especially when we were walking around the streets and when we just started singing, and everyone was just amazed, so it was a great experience. We just sang for fun and everyone loved it.”