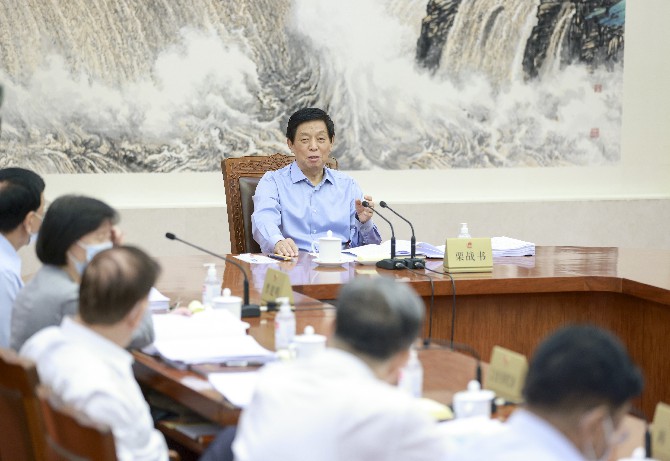 Li Zhanshu, chairman of the NPC Standing Committee, presides over a meeting, Tuesday

China’s highest legislative body is set to discuss adding national laws to the annexes of the charters of both Hong Kong and Macau, according to a report by the state-run news agency Xinhua.
The discussion of the Standing Committee of the 13th National People’s Congress (NPC) will occur in a closed-door session to be held from August 17 to 20 in Beijing.
According to the proposed agenda, lawmakers will consider a draft decision to include additional national laws in the list of statutes in Annex III to the Basic Law of the Hong Kong Special Administrative Region (HKSAR) and a similar resolution concerning Annex III to the Basic Law of the Macau Special Administrative Region.
No further specifics of the legislation were disclosed.
The decision was made on Tuesday at a meeting of the Council of Chairpersons of the NPC Standing Committee, presided over by Li Zhanshu, chairman of the NPC Standing Committee.
This move follows the legislative body’s passage of an anti-sanctions law last month.
The purpose of formulating the law is to counter unilateral sanctions imposed against China by foreign countries, safeguard national sovereignty, security and development interests as well as to protect the legitimate rights and interests of Chinese citizens and organizations.
An official of the Legislative Affairs Commission of the Standing Committee of the NPC previously told Xinhua that there is an urgent need to safeguard China’s national sovereignty, security and development interests.
As cited in a Bloomberg report, Chinese diplomats wrote an article last month in the state-run Study Times calling for the sanctions legislation to be added to the charters of Hong Kong and Macau.
The Joe Biden administration previously issued a blanket warning to U.S. firms about the risks of doing business in Hong Kong, noting that the business environment in the region is “deteriorating.”
The Office of the Commissioner of the Chinese Foreign Ministry in Hong Kong has condemned the “business advisory” issued by the U.S. government and the “sanctions” imposed against officials of China’s central government in Hong Kong.
A spokesperson for the office said that the “arbitrary” and “bullying” action by the U.S. has “smeared Hong Kong’s business environment, seriously violated international law and basic norms governing international relations.”
Also, the spokesperson for the Hong Kong and Macao Affairs Office of the State Council recently affirmed that any “bullying” sanction will meet harsh countermeasures, expressing resolute support for the Chinese foreign ministry’s decision to impose reciprocal sanctions against six individuals and one organization in the United States.
In March, China’s top legislature voted unanimously to adopt the amended Annex I and Annex II to the Basic Law of Hong Kong.
The two annexes concern the method for the selection of the HKSAR Chief Executive and the method for the formation of the HKSAR Legislative Council and its voting procedures, respectively.