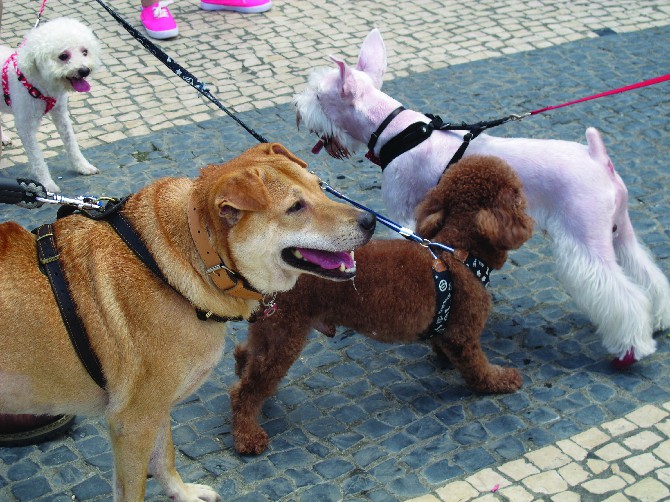 At least two dog owners find the Municipal Affairs Bureau’s (IAM) new instruction that requires them to wipe their dogs’ urine dry with absorbent materials “inconsiderate and impractical.” The new instruction took effect yesterday.
In its first version, the IAM’s new instruction aimed to require dog owners to place diaper-like absorbent materials under their pets to contain the urine.
Although the IAM started advertising the new instruction about a month ago, many dog owners found it full of grey areas and wondered if they were abiding by the requirement.
Indeed, the General Regulations Governing Public Places has been in place for a decade or so, in which the stipulation that requires owners to “clean up after their dogs” has been promulgated. Failure to do so will result in a fine of MOP600.
The stipulation, however, has never been made as clear as the new instruction issued by the IAM. That raises concerns over its legality and whether the IAM has the authority to issue that instruction.
As the main group being impacted by the new instruction, many dog owners find the requirement impractical and a source of annoyance. On top of that, Josephine Lau, vice president of the Abandoned Animals Protect Association of Macau, describes the new instruction as environmentally unfriendly.
“The [proposal] of absorbent materials is both environmentally unfriendly and ineffective,” a dog owner, surnamed Lau, who keeps a German Shepherd, told the Times. “I may need to use three pieces every time my dog pees.”
With that said, if enacted, the new instruction may also impose an excessive financial burden upon dog owners.
Another owner, surnamed Cheang, expects difficulties when practicing the new instruction, although she has not yet tried it as of press time. She thinks the new instruction inconsiderate as well.
“When a dog pees there’s not much [of an] angle [to] place the diaper underneath,” Cheang explained. “Also, you can’t tell when a dog wants to pee.”
Lawmaker Sulu Sou has been helping a group of dog owners in respect to the matter. He agrees with owners helping to maintain a clean environment, stressing that the General Regulations have never pinpointed a particular “way of cleaning.” He finds the IAM’s new instruction confusing, as it will make people think not absorbing the urine will result in a fine.
In response, the IAM noted that wiping urine clean with absorbent materials is only a recommended way as the bureau finds it more effective than simply rinsing the urine with water. It stresses that the violation criterion is whether or not owners “clean after their dogs.”
Meanwhile, a lobbyist, surnamed Chan, has started a petition against the IAM’s new instruction. Chan has collected more than 1,000 signatures to present to the IAM. He also proposed the IAM adopt a popular method used in some European cities, which involves rinsing away urine with water blended with white vinegar.
To support the campaign, local animal welfare organizations cited research conducted by the University of Birmingham in the U.K., which proved that as low as 1.6% acetic acid is capable of stopping the formation of biofilms. It can be achieved by using white vinegar solution.
But the lawmaker revealed that the IAM was not convinced by the results, mocking the history in which people boiled vinegar in the hopes of killing “bacteria” during the SARS outbreak. Like Covid-19, however, SARS is caused by a virus rather than bacteria.
Nonetheless, the IAM has agreed to conduct a study on the proposed method of using vinegar solution.