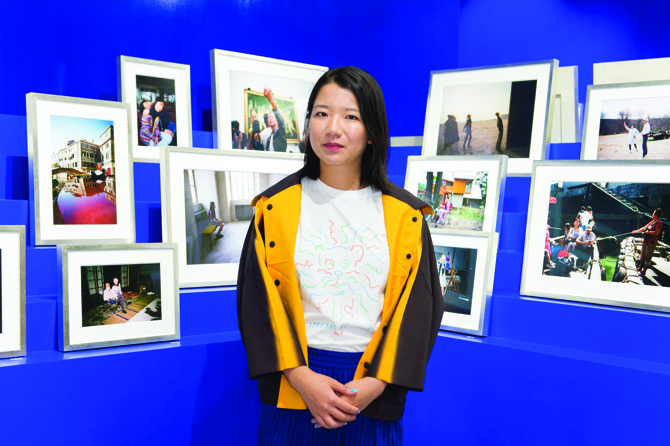 This year marks the 70th anniversary of the founding of the People’s Republic of China and the 20th anniversary of the establishment of the Macao Special Administrative Region. On this celebrative occasion, MGM presents “Rooster, Tiger, Sheep by Snake” – Wen-You Cai Photography Exhibition at MGM Cotai, from October 5, 2019 to February 9, 2020.

Working closely with her dad, the renowned Chinese artist Cai Guo-Qiang, Wen-You Cai records the daily life of the artist and the family through her lens. This exhibition titled after Chinese zodiac signs of her family members is to illustrate their personalities with her photography work.

“My father is ‘rooster’, my mother is ‘tiger’, my younger sister is ‘sheep’ and I’m ‘snake’. We have quite different characters but formed a harmonious, loving and playful family,” said Wen-You Cai, who hoped audience would explore more through this never before published family album.

Wen-You Cai, born in 1989 in Tokyo, Japan, called herself as a “reluctant artist and day dreamer”. At the age of five, she was gifted a camera and from then on her life became intrinsically entwined with photography; the immense joy of clicking the shutter began to grow in her.

Wen-You recalled that the idea of capturing moments of her families was first inspired by her younger sister, who was born in U.S. and owns an outgoing character. “My sister likes to speak out and express what she wants. I have been unconfident to express myself in front of the camera. Therefore I see her as my opposite and use my camera to ‘observe’ such an opposite,” said the young artist.

Wen-You’s strong respect for traditional Chinese culture has not faded despite residing in New York with her family. “As a Chinese family living abroad, we share cultural connections between east and west. Macau is also a city with diversified cultures, like my family,” she added.

In 2015, she published her memoir When You Make No Art, about growing up in the art world. In 2016, she founded Special Special an art edition gallery and concept store in New York City, and it has produced 36 unique collaborations with artists and makers. With the support of MGM, the pop up store of her brand store is also launched at MGM Cotai. The playground themed pop-up store features items created by independent artists, reflecting a retro ambiance that is reminiscent of happy childhood curiosities. The pop-up store will last till February next year.

Wen-You’s artist father, Cai Guo-Qiang, who also presented at his daughter’s exhibition opening, believes she has found her own way to art: “She said she makes no art. Actually she’s been avoiding to do the same art with me. And I think she did it,” said the father Cai. 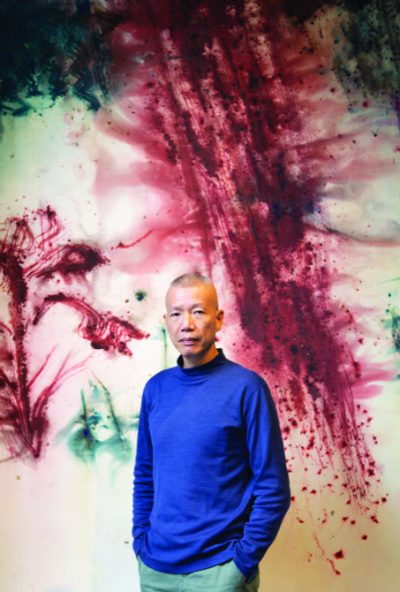 Cai Guo-Qiang with ‘Study for Uffizi: A Bouquet of Flowers No.1’ in the background

In addition to his daughter’s photo exhibition, Mr Cai was at MGM Theater for a “Master Talk” and shared the documentary of “Sky Ladder: The Art of Cai Guo-Qiang”. Directed and produced by Oscar-winning filmmaker Kevin Macdonald, the documentary traced Cai’s meteoric rise from childhood in Mao’s China to pre-eminent global artist as well as his ambitious project, Sky Ladder, that wowed the world in 2015.

The master artist Cai Guo-Qiang, who was born in 1957 in Quanzhou, China, is the pioneer of “explosive event” – pyrotechnical displays as conceptual art. He was trained in stage design at the Shanghai Theatre Academy from 1981 to 1985, and his work has since crossed multiple mediums within art including drawing, installation, video, and performance.

Cai began to experiment with gunpowder in his hometown Quanzhou, and continued exploring its properties while living in Japan from 1986 to 1995. Cai served as Director of Visual and Special Effects for the Opening and Closing Ceremonies of the 2008 Summer Olympics in Beijing, when he surprised the audience with creative “footprint fireworks”. He was installed as fireworks director for the blazing creations of 70th National Day Celebration in Beijing.

“Working with a country is not easy for an artist,” said Mr. Cai, “When artists make their own exhibitions or artworks, they made their own decisions. You have to adjust your position when working with a country.” He added that events related to a country was usually focus on “great and grand” effects, lacking those romantic and touching elements.  Cai hopes through his participation, atmosphere of the society would become more “open, interesting and lively”.

In June 2015, Cai created the explosion event Sky Ladder in his hometown Quanzhou. The artwork became the centerpiece of the Netflix documentary. Mr. Cai recalled that he had started the trial some 20 years ago yet failed in different international cities. It was finally succeed in a small city and spread to the world through social media. “It gives hint to young people that you don’t necessary to be in big cities like New York or Paris, you could start in your hometown and create a work that touches the world.”

Cai’s two gunpowder artworks, Alchemist and Study for Uffizi: A Bouquet of Flowers No.1, are recently acquired as MGM Chairman’s collection and displayed at Emerald Lobby permanently. Grace Yu, MDT