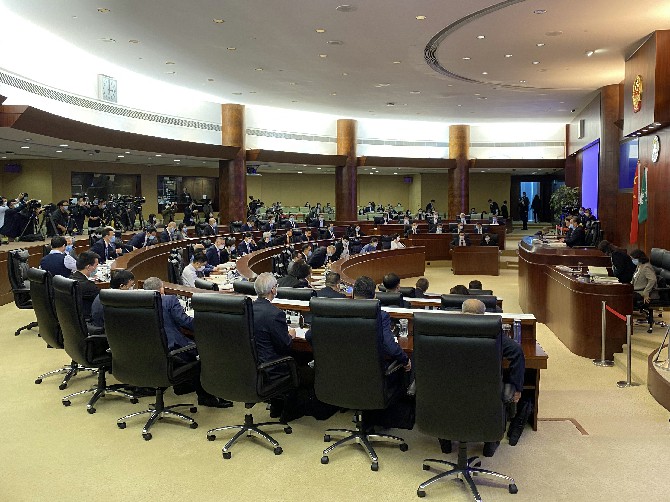 The government has not reduced any of the social support measures to the citizens in the Policy Address for 2021 (LAG2021), the Chief Executive (CE) Ho Iat Seng said yesterday at the Legislative Assembly (AL) where he responded to the questions of the lawmakers on the LAG2021.
Questioned by several lawmakers about the reduction of social benefits and subsidies from the government to citizens and about the absence of information regarding a potential third round of financial relief measures to mitigate the impact of the economic crisis induced by the Covid-19 pandemic, Ho said, “We are not reducing any subsidies and support to the population. But we need to follow the legal regimes established for that purpose. [The laws into force] provide that only when we have a positive balance in our accounts, we can share such profit with the population. This is what is clearly stated.”
“It is not just about wanting or not wanting to give more, we need to follow the legal regimes. We can’t just attribute money as we want,” he said, first in reply to a question from lawmaker José Pereira Coutinho before repeating it to others later.
“If you think we need to change the [legal] regime, then we need to discuss [this],” Ho said, explaining that giving the annual cash handouts of 10,000 patacas for permanent residents and 6,000 for non-permanent residents is a procedure that can be done without the need to change the laws. However, for other special financial relief measures, the government needs to have laws that allow the official to act in such a manner.
Questioned by the same group of lawmakers which included Coutinho, Sulu Sou, and Ella Lei on the non-injection of funds in the Central Provident Fund, Ho explained once again, “We need to balance the [government] accounts [first] to be able to reinstall some of the other measures.”
Questioned also about additional support measures for small and medium-sized enterprises (SMEs), Ho said that the government needs to invest more and further work on that topic.
“At this moment we don’t have a very effective formula on how to transform them [Macau’s SMEs] into a more technology-based sector. Promotingthe use of technology by the old sectors is possible and we are doing that, but to transform them [into a different sector] is very difficult,” the CE said, adding that for the time being the direction being followed is to allow them to explore the online market rather than “force them to a conversion.”
For Ho, the solution for a transformation of local SMEs into technology industries would come from a new generation that “can start new businesses that follow the new standard. This will be more suitable than to trying to change the old.”