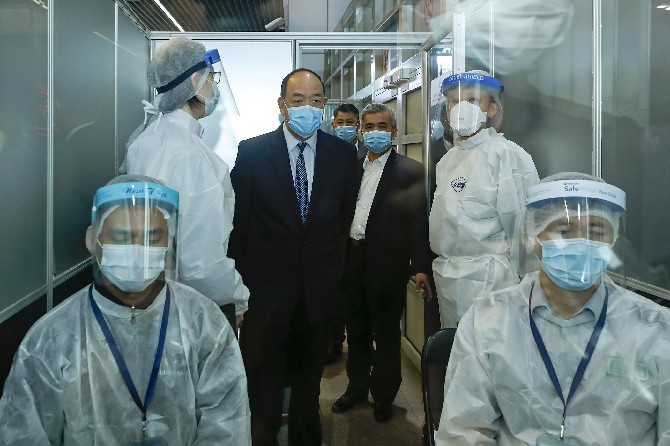 Chief Executive Ho Iat Seng admitted that several bureaus have committed flaws in their decision to ban local sporting activities last week.
The Health Bureau (SSM), the Sports Bureau (ID) and the Education and Youth Affairs Bureau (DSEJ) issued contradicting notices over the weekend on the arrangements of local sports events.
The government head admitted that the flipping of guidelines have generated confusion among the general public, specifically the sports circle.
It was valuable that the SSM changed its mind after getting feedbacks from the ID and the DSEJ on the new guidelines’ impracticality, Ho explained.
The CE praised SSM, noting, “Since early this year, the workload of the SSM has been enormous.”
“If someone should be held accountable, it would be me because I’m the head of the Covid-19 Center.”
Ho inaugurated the Novel Coronavirus Response and Coordination Center during the peak of the local outbreak. While SSM is part of the Center, Ho is its head.
However, he hoped that in the future, different bureaus can have better coordination.
At the press briefing where the top official answered queries from the media, cash handouts for next year were discussed, among several questions.
The CE assured in the Policy Address that it will remain at the level of MOP10,000, only that the form of distribution will be determined later.
The government head said that the amount has been included in the next year’s public budget. It will be issued, if everything goes well, in July as in normal times. However, the government is still considering which form of distribution will be helpful for the economy. The distribution form will only be determined by July next year.
Ho explained that consumption expenditure did not increase in April this year when the cash handout was distributed. However, he pointed out that the consumption card, which was issued in May, did boost consumption.
He acknowledged that distribution in the form of cash is preferred by most residents, as it helps people pay bills and repay mortgages. However, if people keep the cash in their pockets, it will not help the economy recover, the CE explained.
The current consumption card is not applicable in getting medical services, settling public utility bills, taking cross-boundary transports, or making payments to financial institutions.
Meanwhile, the CE hopes that Hong Kong people can enter Macau without undergoing quarantine once its Covid-19 situation has stabilized. The neighboring city is the region’s second largest source of tourists.
Recently, Hong Kong has been seeing stippled Covid-19 cases which has stopped Macau authorities from delisting it from low-risk areas. “We have to follow national guidelines,” the CE stressed.
Yet, he suggested Hong Kong people to enter mainland China, where they will be quarantined with a smaller price tag for 14 days, before coming to Macau. In this case, they will be exempted from quarantine in Macau.
Later, when he was asked to lift quarantine on people coming in from Taiwan, where no local cases have been recorded in the past 200 days or so and is the third largest source of tourists in Macau, he stressed that Taiwan cannot yet be considered free from risks.
Meanwhile, he was displeased about how Taiwan treats entrants from Macau. “We have seen more than 200 days without a case,” Ho said. “Even with that, Taiwan is not opening its borders to us, how can we consider them an area with low risk?”
In addition, a group of Macau students studying in Taiwan is calling on the government, under the assistance of lawmaker Sulu Sou, to lift quarantine measures, so that they can return to Macau to spend time with families during holidays.
When asked about its exit strategy for non-resident workers and the employment of local residents, Ho urged people to work in the construction or catering industries because they are lacking workforce.
With many local residents holding university degrees, it is unclear how the private sector will be convinced to take them in to work in strength-demanding positions.