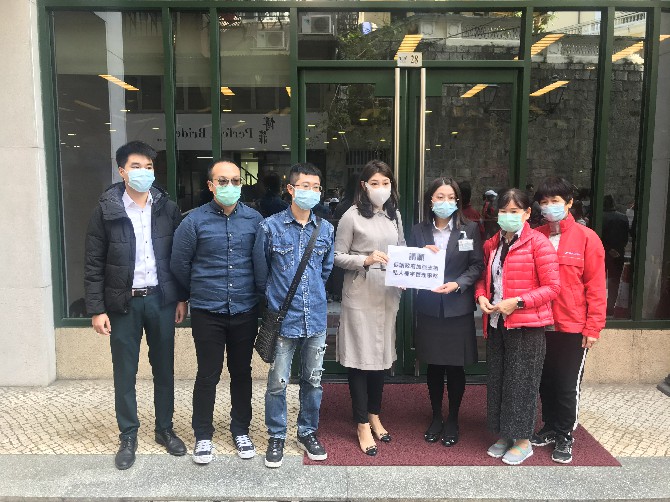 Yesterday, a group of more than 10 people delivered a petition to the government headquarters asking for support in private property management affairs.
Lawmaker Sulu Sou accompanied the group.
The group consisted of members of the property management committee of two buildings located in the northern district.
The committee believes that the Housing Bureau (IH) should provide a location, which they could apply to use, for them to organize meetings among property owners.
The group also wants the bureau to help relevant committees review a drafted letter of appeal to confirm if there are any illegal regulations proposed inside the draft. This proposal serves the purpose of reducing the number of disputes among property owners.
In addition, the group urges the IH to deploy officers to attend their meetings, as well as to provide legal assistance on-site.
Meanwhile, a call to review law No.13/2012, and to provide judicial help to property management representatives who do not have the financial capability to be involved in a lawsuit when they are sued are included in the petition.
In addition, suggestions have been made for the housing authority to provide arbitral help for property owners so that they can solve a dispute without having to enter into a lawsuit.
In their petition to the government, the group pointed out a situation where real estate developers sue all the property owners of one building in order to take ownership of the relevant parking lot.
“It is necessary for the government to look at the dispute regarding the ownership of parking lots built before and which will be potentially built in the future and it is necessary for the government to find a solution for the problem, otherwise the issue could create social problems at any moment,” the group stated.