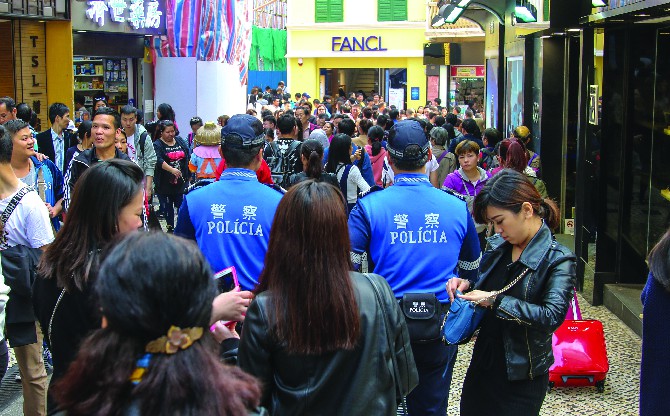 Lawmakers of the Third Standing Committee of the Legislative Assembly (AL) have raised questions regarding the security force and security department’s disciplinary investigation procedures.
Yesterday, the committee held a fourth meeting to discuss the general clause ordinance.
After the meeting, the chairman of the committee, Vong Hin Fai, reported details about the discussion to the media.
Article 125 of the ordinance suggests that the police department initiating a disciplinary procedure should select individuals from the same department as investigators in the investigation process.
The investigators should rank higher or have more years of work experience compared to the accused. However, under certain conditions, such as when the disciplinary case is complex, investigators can be from other departments within the security forces. This is also to ensure fairness and transparency, and to avoid conflicts of interest.
Currently, Macau’s security force includes the Public Security Forces Affairs Bureau, the Public Security Police Force, the Fire Services Bureau and the Higher School of the Public Security Force of Macau and the Unitary Police Service. Once the ordinance comes into effect, the Macao Customs Service will also be a member of the security force.
In other situations, the Chief Executive can appoint investigators from departments that are not members of the general clause ordinance.
During the meeting, some opinions suggested that lawmakers could be appointed as investigators, as well as members of the police disciplinary committee.
In situations when a disciplinary procedure is triggered based on the notification of external disciplinary organizations, presumably the disciplinary committee, the amendment also proposes that the disciplinary committee must be informed before the investigators make a final decision.
Some members of the Third Standing Committee asked if the opinions of the disciplinary committee will be important during investigation procedures.
Others asked if the security department would restart an investigation if the disciplinary committee disagreed with the results.
According to the ordinance, both the accused and the accuser involved in a disciplinary procedure are entitled to make an administrative or judicial appeal.
Article 144 prescribed penalties for a disciplinary offender. The current law prescribes four types of penalties: verbal warning, written warning, fine and suspension. The new amendment only consists of three penalties: written warning, fine and suspension.
Within the Third Standing Committee, there were also opinions regarding whether or not verbal warnings would be ineffective.
Government representatives will be invited to attend the committee and respond to all the aforementioned opinions and questions.
During yesterday’s meeting, lawmakers discussed articles 109 to 149.
The law has 227 articles in total. Local government proposed that the law should come into effect in 30 days after its publication.
The current law came into effect in 1995 and has been implemented for over 25 years.
Overall, the amendment proposes upgraded promotion mechanisms, and disciplinary and reward policies.