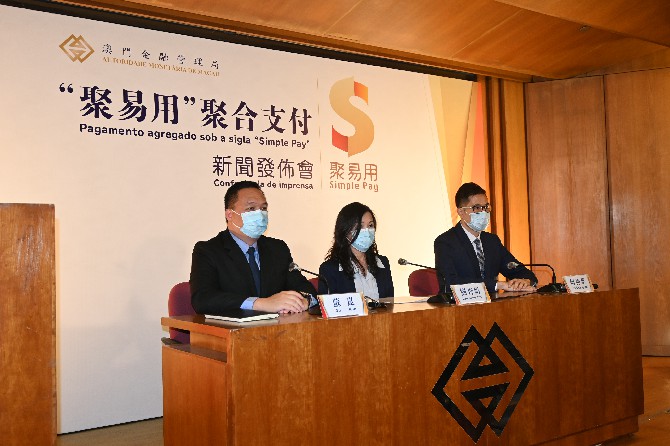 Simple Pay, a new form of payment introduced by the Monetary Authority of Macao (AMCM), will allow customers to use their mobile phones to scan businesses’ QR codes to pay for a service or product.
On February 8, AMCM will initiate a pilot period for the first stage of the scheme, the authority announced in a press conference yesterday.
Businesses will scan the QR code which customers present on their phone to collect payments.
Supposing the first stage goes well, AMCM will initiate a second stage where customers will be able to scan retailers’ QR codes.
As of yesterday, the city has approximately 70,000 POS systems utilized for QR code payments.
Simple Pay aims to integrate all types of e-payment into one system, allowing businesses to accept all existing payment methods using a terminal or QR code.
Currently, local shops without Simple Pay will typically have multiple POS terminals, each for a different e-payment app, causing merchants inconvenience.
QR code payments can be processed by the business by scanning a QR code on the customer’s phone. A customer can also use their smartphone to scan a business’ QR code to pay.
While both of the aforementioned payment methods are commonly used in mainland China for example, most of Macau’s businesses, such as supermarkets, will only accept the first method and scan their customers’ QR codes.
With Simple Pay’s arrival, both kinds of payment may become more common in Macau.
Once a retailer upgrades their POS system to Simple Pay, the retailer will only need one POS terminal to receive e-payments. This means that some of the POS terminals currently being used may not be needed anymore.
Regarding the potential waste of POS terminals, AMCM says that financial organizations will help retailers recycle the unneeded POS systems and distribute these devices to other retailers.
Simple Pay is compatible with local and overseas e-payment methods.
In 2020, Macau logged over 65.49 million internet payment transactions, involving a total of 6.33 billion patacas.
Simple Pay integrates eight internet payment including Alipay, BOC Pay, UePay, LusoPay, and MPay.
Bank of China (Macau), Macau Pass, Banco Tai Fung, UsPay and the Industrial and Commercial Bank of China (Macau) are the five financial organizations providing the Simple Pay POS system and the Simple Pay QR code.