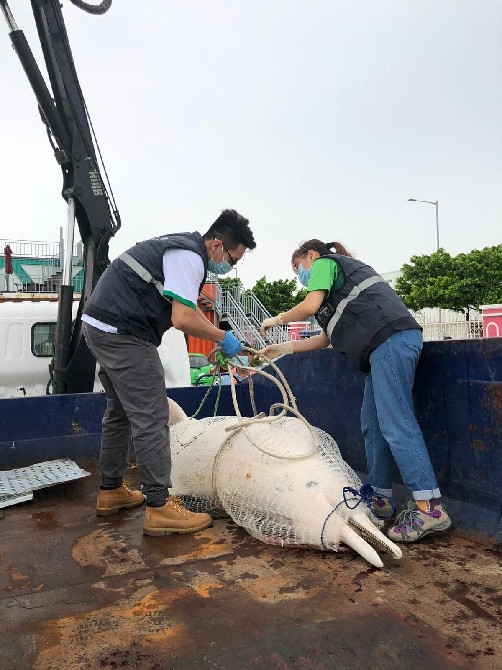 The body of a humpback dolphin was found Saturday morning off the coast of Tam Kong Temple, Coloane. This is the sixth dolphin from the species commonly known as the Chinese white dolphins found dead over the last 14 months.
Officers from the Municipal Affairs Bureau (IAM) were on site to handle the body of the animal. The preliminary post-mortem did not find any external wounds, besides some minor skin peeling. The IAM officers hypothesized that the body had been carried by the current after the dolphin had died. The body was cremated immediately as it was decomposing.
In mid-May, several videos went viral on social media, showing humpback dolphins splashing in waters near the Kun Iam Statue in NAPE. At the time, analysts thought this was due to the suspension of regional ferry services amid intensified Covid-19 restrictions, making the waters less disturbing for the dolphins.
In his recent written inquiry to the government, Lawmaker Sulu Sou reiterated that the species had been categorized as endangered both nationally and internationally. He referenced Hong Kong authorities, who estimated that at least 2,500 of the dolphins were residing in the Pearl River Delta vicinity.
Meanwhile, a 2014 study conducted by Sun Yat Sen University in Guangzhou predicted that the species would lose 74% of its population over the next 60 years.
The Macau government has been legally bound to conserve aquatic ecology in the new waters given to Macau by the central government in 2018. Sou pointed out that two years have passed and the government has done nothing in this regard.
Local environmental advocate Joe Chan has submitted a letter to the government, urging the administration to create oceanic reserves, as well as improve coastal water quality, restrain the cruising speed of ships, monitor aquatic ecology, and study what caused the deaths of the dolphins.
Chan also blamed the Sewage Treatment Plant for constantly operating beyond its processing limit and failing to follow set procedures, meaning it releases 20% untreated wastewater into the sea. He has also suggested that the Environmental Protection Bureau study the local water ecology and publicize the results each year.
Lawmaker Agnes Lam wrote on her social media page about losing another humpback dolphin. She urged the government to study its cause of death and work on changing the living conditions of the dolphins. AL