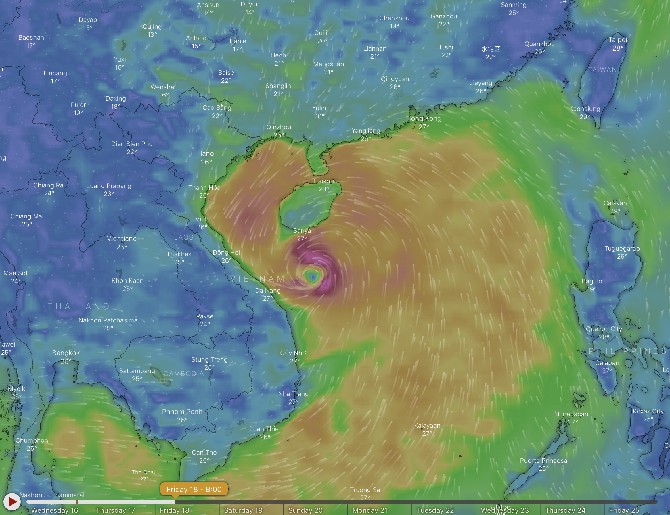 The location of Noul at 8 a.m. on Friday morning, as projected by weather forecasting app Windy last night

The Meteorological and Geophysical Bureau (SMG) is considering issuing a Tropical Cyclone Signal No. 1 this morning as tropical storm Noul gradually intensifies and moves across the South China Sea today, heading towards the central part of Vietnam.
As it passes within 800 kilometers of the SAR this morning, the SMG noted that it will consider issuing a Tropical Cyclone Signal No. 1.
Affected by the outer circulation of Noul, winds in Macau will intensify between tomorrow night and Friday, with heavy showers and thunderstorms at times.
Flooding is expected in low-lying areas of the Inner Harbor due to the astronomical high tide tomorrow morning and on Friday.
The SMG advised the public to pay close attention to its latest notification.
The Hong Kong Observatory will also consider issuing a Standby Signal No. 1 during the day tomorrow.
The relevant department in Taiwan, meanwhile, noted that the storm is unlikely to threaten Taiwan but could cause strong winds in the South China Sea, and so it is cautioning ships in the area to stay alert.
As of last night, tropical storm Noul had moved into the South China Sea, where the local weather authorities warned that Noul continued to intensify, forecasting that it would become a typhoon within 48 hours. Conditions will remain unstable into Saturday, as a weather front is expected to approach as Noul moves away.
The tropical storm was given an international name that was assigned by North Korea. “Noul” means “red sky.”
Tropical storm Noul is the first storm since typhoon Higos, during which the SMG raised the level to Tropical Cyclone Signal No. 10.
Macau was spared from severe damage, injuries, and casualties during the overnight passage of typhoon Higos. According to a report from the Unitary Police Services, the operational team responsible for the evacuation of residents living in areas most at risk of flooding evacuated thousands of residents from such areas to safe locations. LV