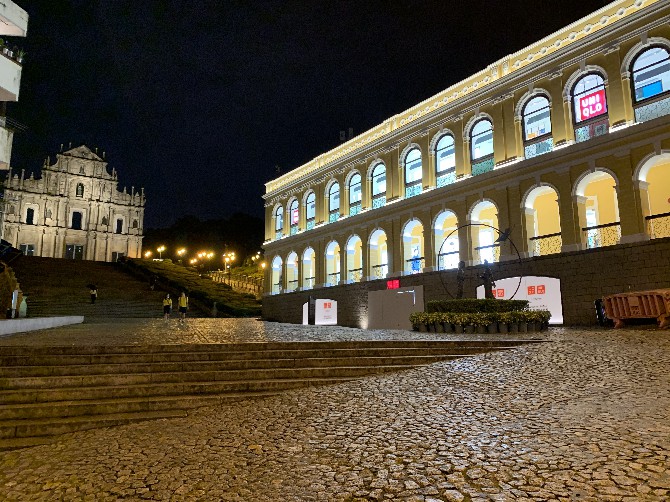 Macau’s long-term prospects of tourism revival and development will depend on cultural factors, Dr Pan Lei, academic at the University of Macau and an enthusiastic traveler, has told the Times in an exclusive interview.
Lei teaches Communications at the university, but is an extensive traveler. He has authored several travel-related books.
Often considered “side dishes” to support the gambling-oriented tourism industry of the city, cultural factors should have their role in the long term of the industry’s development, Lei argues.
“Although it is the heartbeat of Macau, [the effect of] tourism cannot only be evaluated based on monetary income, it also affects quality of life,” Lei explained. “If our cultural development is stale, the tourism industry will be affected as well.”
He admitted that developing cultural factors may not immediately bring in economic advantages, but in the long term it will be beneficial to the tourism industry.
According to Lei, cultural tourism is not about getting a city packed with people. Rather, it is about attracting tourists to revisit Macau. “This is beneficial to the healthy development of the tourism industry,” Lei concluded.
“The main problem facing Macau is over-crowdedness,” Lei pointed out, citing some of his friends from Hong Kong and Mainland China, who are of a middle-class background, are not so much convinced to come back to Macau because conducting tours in Macau is time-consuming, inconvenient and family-unfriendly, despite their fondness for the cultural atmosphere of the city.
It is also crucial to Macau’s revival because if travelling is restrictive, tourists will prefer to see places that they consider worthwhile.
On the other hand, Professor Leonardo Dioko, director of the Tourism Research Centre of the Macau Institute for Tourism Studies, estimated it may take a couple of years for Macau to regain its prominent tourism performance.
“Probably 1 to 2 more years before we get on [the] way to recovery and begin regaining pre-Covid status,” Dioko estimated. He listed out several variables determining the speed of recovery: the availability and distribution of vaccine in both Macau and its source markets, as well as the impact on disposable incomes in Macau’s source markets. “Travel demand will remain dampened unless [it is] accompanied by economies recovering as well,” he explained.
Lei holds similar expectations, adding that quality of tourism products is a determining factor. “When global tourism activities gradually return, people will choose places they have been to and liked, or those with better recommendations,” Lei explained. “Quality should be [considered] all the time.”
Heavily relying upon mainland Chinese tourists, the city’s government has always discussed economic diversification, but not so much source market diversification. When asked about the topic, both academics expressed their approval of the Macao Government Tourism Office’s (MGTO) efforts in the attempt to diversify the city’s source markets of visitors.
Lei agreed that the MGTO has done quite a lot of work to promote Macau in markets other than the Greater China Region.
As far as he knows, the MGTO has regularly organized familiarization tours for journalists from various regions. He has also been interviewed by journalists from Singapore and Malaysia, hinting that the effort of MGTO in promoting Macau in these countries has worked out.
“I even saw advertisements placed by the MGTO on one whole carriage of a Japan Railway train,” Lei said.
Meanwhile, Dioko also applauded the MGTO. “[Efforts] expended in source market diversification, especially those by the MGTO, have been admirable, given the tough pre-Covid competition and alternative destinations now available to our traditional source markets,” Dioko remarked.
Regarding the future, both academics addressed the difficulties of source market diversification.
“Source market diversification has been the holy grail of Macau’s tourism development,” the professor remarked. “[It] has been very difficult for Macau to be weaned off its reliance upon the lucrative markets of Greater China.”
On the other hand, Lei observed the monetary and chronological difficulties.
“Usually these tourists are from further [away] places, meaning it is more costly to them,” Lei explained. Seeing more tours covering both Hong Kong and Macau, the academic admitted that in many ways Macau still has to rely on nearby cities to diversify its source market.
In addition, Lei pointed out that it also relies on Macau’s own attractiveness to various types of tourists. For example, it is a question whether the city is attractive to Meetings, Incentives, Conferences and Exhibitions (MICE) tourists, family tourists and cultural tourists.
On the establishment of travel bubbles with other markets, Dioko considers it impossible, at least in the short term. It relies on the existence of various similarities between the two hypothetical participating destinations.
“We need each other’s thorough help in various strategic arenas such as healthcare, vaccine purchase and distribution, economic assistance, etc., and [we need to] adopt a regional collaborative approach,” the academic explained.
In October, Macau received nearly 590,000 visitors, an approximate 30% rise from the figure in September. The first ten months saw slightly more than 4.6 million visitors.