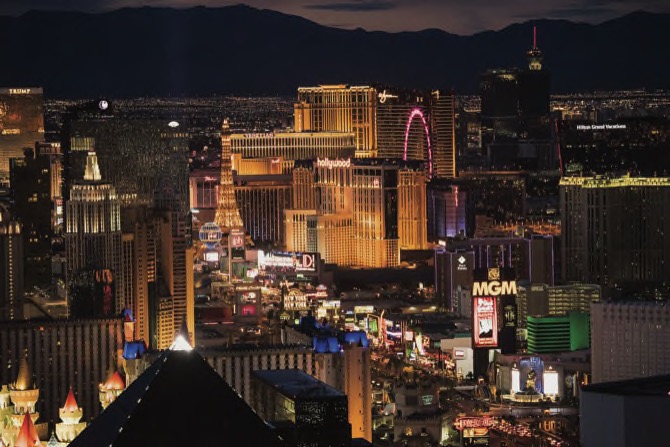 The jobs were advertised as some of the best in Las Vegas: collect big tips while dealing blackjack on the Strip.

But inside the casino “party pits,” women were the prey, dressed in bikinis and lingerie to be ogled by the customers and used as bait for gamblers. The workers are part of a chorus of women in the casino industry, among them cocktail waitresses and go-go dancers, who say they’ve been harassed, groped or asked by bosses for sex in return for good assignments.

Yes, this is Las Vegas, a city built on excess, gambling, drinking and sex. But the abrupt resignation of Steve Wynn, chief architect of the modern Strip, has drawn widespread attention to what has long been an open secret: few places in the U.S. are more perilous for women workers than Vegas.

A review of lawsuits, and interviews with women who have worked in party pits and casinos, paint a picture of an industry that has allowed its reputation for debauchery and permissiveness to seep its way into the workplace. (Wynn, who’s been accused of harassing women and coercing them into sex, has called the allegations preposterous.) “There’s a culture on the Strip. Sex sells,” said Las Vegas attorney Maile Lani Esteban-Trinidad.

The casino industry in Nevada employs more than 179,000 people, many of them in low-wage jobs in housekeeping, food service and bartending. The state leads the nation in sexual harassment complaints per capita, according to data from the Equal Employment Opportunity Commission and the Bureau of Labor Statistics. The rate was about 25.6 complaints per 100,000 female workers. Those numbers represent a small percentage of the overall incidents, according to labor lawyers and workplace safety advocates, because so many don’t get reported out of fear of retribution.

“Sexual harassment is endemic in the hospitality industry, where you have vulnerable workers who are quite frightened to do anything about it,” said Jay Holland, an attorney specializing in employment law in Greenbelt, Maryland. “In Las Vegas that culture, that fear, is magnified by the whole theme of the city: What happens here, stays here.”

One woman, Eriko Yutani, was trying to make a go of it as a blackjack dealer by joining a staffing agency called Casino Job Center Inc. The company specializes in staffing party pits with scantily clad women at poolside gaming tables and other parts of resorts, with loud music and provocative dancing creating an atmosphere of bacchanalia.

Party-pit dealers such as Yutani could make as much as USD90 a hour in tips – much more than traditional dealers made – working at a high-end property like the Cosmopolitan to pay for her education.

The compensation came at a price. Yutani and other dealers were rated by some of the casinos based in part on their looks, she said in a court filing. And since management controlled which casinos she’d work and when, the assignments could make a huge difference in her income.

The owner, Jace Mande, declined to comment on the allegations because of a confidentiality agreement as part of the settlement of the case.

Dealers in ordinary positions in casinos have also raised allegations of being harassed, and even facing swift retaliation when making complaints. A dealer at Boyd Gaming Corp.’s Fremont Casino said her boss inappropriately hugged and touched her in his office, pressuring her to perform sex acts on him and threatening her job if she refused. The manager left the company and moved to rival Golden Nugget, where he continued to harass her, she said in a court filing.

The woman reported his behavior to Golden Nugget management, but found herself immediately suspended, denied a transfer and the subject of “constant gossip and hostility at work” from other Fremont Casino managers whom she said where friends of her former boss. Boyd Gaming didn’t respond to requests for comment.

Late shifts and an alcohol-fueled environment were part of the on-the-job conditions for Eva Perez, a waitress at Red Rock Resorts Inc.’s Texas Station casino. The woman said in a court filing that she was socializing after hours with coworkers one night in 2015 when the bartender began pouring tequila shots for her. After the 2 a.m. closing time, the bartender insisted on driving her home even though he himself was intoxicated. He instead took her to his apartment where he sexually assaulted her, she claimed in a lawsuit. Red Rock had no comment. Perez gave permission for her name to be used through her attorney.

“I wouldn’t want to indict an entire town with one statement, but I think for certain individuals, being in Vegas presents a little greater liberty in their mind about how they can act around women,” said attorney Daniel Watkins, who also represents sexual harassment victims in Las Vegas.

Some companies, and advocates for employees, are trying to change conditions. Culinary Workers Union, which represents some 57,000 casino employees in Nevada, said it has been making strides in protecting employees, including pressing casinos to allow housekeepers to wear pants instead of skirts as their uniforms and giving them “panic buttons,” handheld devices they can use to call for help in the event they are attacked.

Winning harassment cases against casinos has historically been difficult, in part because casinos donate to the election campaigns of local judges, who tend to be more sympathetic to business, according to Esteban-Trinidad, the Las Vegas employment attorney.

The Wynn allegations, which led to the toppling of an industry legend, may inspire other women to come forward. Gaming regulators in Nevada continue to investigate the allegations against Wynn, even after he stepped down last week as CEO of the company he founded.

“Public awareness of it will make others more willing to stand up and take on these types of cases,” Esteban-Trinidad said. Christie Smythe, Christopher Palmeri, Bloomberg