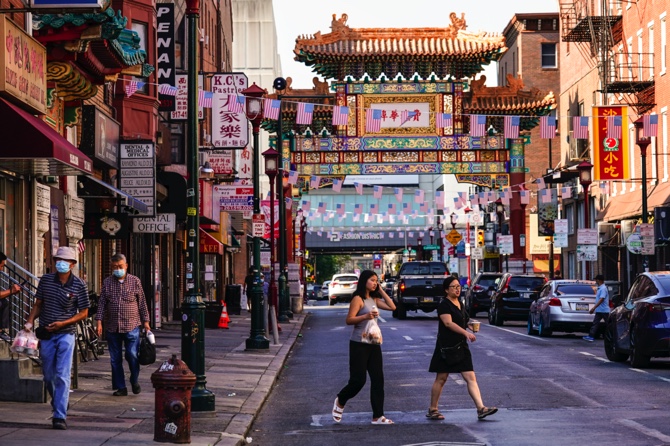 Pedestrians cross 10th Street in the Chinatown neighborhood of Philadelphia

Wei Chen wants people who visit Philadelphia’s Chinatown to look through the community’s gateway arch and see the residents chatting in Mandarin on the steps to the apartments above or the vendors selling traditional Chinese food to families walking by, not a giant Philadelphia 76ers arena a block away.

“These apartments are full of people who are low-income, who are elderly people, and people who are new immigrants,” said Chen, the community engagement director for Asian Americans United. “You have to think about how Chinatown was created. We weren’t welcome in other neighborhoods.”

Chen, along with other organizers and members of Chinatown, said they were surprised by the Philadelphia 76ers’ announcement last week of a proposal to build a $1.3 billion arena just a block from the community’s gateway arch. They said neither the organization nor the property owner reached out for community input before the announcement.

A spokesperson for 76 Devcorp, the development company behind the arena, said in an emailed statement that the process is in its early stages — years from “anything changing” — and that the company planned to work with the community to help shape the project and ensure it’s “done right.”

“We are very sensitive to the Chinatown community’s concern in light of prior Center City proposals and are committed to listening to and working with the community in a way that hasn’t happened before,” the statement read.

Those are promises many in Chinatown have heard before. After decades of developments — like the Pennsylvania Convention Center, which took homes from 200 families; Interstate 676, also known as the Vine Street Expressway, which threatened to cut off parts of the community — and proposals for a jail, a casino and another sports facility that all were beaten back by the community, residents have a deep playbook of their own to choose from.

Across the country, there are fewer than 50 Chinatowns, some more vibrant and larger than others. Many took root in areas of cities that were thought of as red light districts. And as cities grew and changed around those communities, many Chinatowns have been under threat from gentrification or development.

Like others, the community in Philadelphia is just bouncing back after losing business during the pandemic, when Chinatown’s restaurants were shuttered for dining-in. Much of the senior population didn’t want to leave the neighborhood because of the fourfold increase since 2019 in hate crimes against people of Asian descent.

“This is an ongoing struggle for Chinatowns and other downtown communities of color and of low income,” said historian John Kuo Wei Tchen, director of Rutgers University’s Clement Price Institute on Ethnicity, Culture and the Modern Experience. “In the case of Chinatowns that play important symbolic roles for the cosmopolitan claims of the city, sport authority interests often trump such roles.”

The 76ers’ current home is in south Philadelphia, a few miles from downtown, along with most of the city’s other pro sports teams.

Many Chinatown residents and business owners are concerned that if a new arena is built, affordable street parking will disappear, traffic will increase, and holding traditional celebrations and festivals could become more difficult. But they are also worried that already-increasing property values could spike and force many who depend on the community to leave.

Debbie Wei is a founding member of Asian Americans United, started in Philadelphia in the 1980s to unite people of Asian ancestry to build the community and fight oppression. She was also an organizer of the protests against a proposed Phillies baseball stadium that city officials wanted to place at Chinatown’s door in 2000.

“If it’s not a stadium, it’s a highway or a convention center. Seattle … Detroit … Chicago, Boston, and then Washington, D.C. I have friends who grew up in Chinatown in D.C. and it’s just been decimated,” Wei said.

The home of the Washington Capitals hockey team and the Wizards basketball team moved to D.C.’s Chinatown community in 1997. Economic development experts say the increased foot traffic and more desirable real estate brought revitalization, but for the Chinatown community it meant rising rents and chain restaurants forcing them out.

Census numbers show that in 1990, about 66% of the people who lived in the D.C. Chinatown area identified as Asian American. That dwindled to 21% in 2010. And as of the 2020 census, that had dropped to about 18% in the two tracts that make up parts of Chinatown.

Wei described signs for chains like CVS and Starbucks appearing with Chinese translations beside them, calling it a “cosmetic illusion.” Chen fears the changes to D.C.’s Chinatown could happen to Philadelphia.

“If you go inside a restaurant or a business, the workers aren’t Asian anymore. The owner isn’t Asian. And a lot of the customers aren’t Asian,” he said. “So where is the Chinatown? It’s not there anymore.”

But in Philadelphia, Chinese-speaking households have been one of the fastest-growing populations, according to the census. The community passed the 5% threshold recently, meaning Chinese languages became official ballot languages. Asian and other immigrant communities contributed to the city reversing a decades-long trend of losing population in recent censuses.

Helen Gym, the first Asian American woman to serve on Philadelphia City Council and an at-large member, held up two T-shirts from previous fights against potentially detrimental developments wanting to come to Chinatown. The first says, “No stadium in Chinatown,” and the second crossed out the word stadium and replaces it with “casino,” for the 2008 proposal that hoped to put a casino near the current proposal for the arena.

Gym previously joined the fight against the stadium and said that now, as a council member, she is “extremely skeptical” of the 76ers proposal.

“To us, this is one of the most vital parts and neighborhoods and communities in the city of Philadelphia,” Gym said. “This side has been a community that has continued to invest in itself, in its people, in small businesses. And in fact, this side is the one that has grown the health and well-being of the city.”

After the stadium failed in 2000, Gym said, the community developed the nearby space north of the expressway to add a public charter school, a community center, extensions of the Chinese Christian Church, the first Cambodian arts center and other cultural organizations.

Wei was the first principal of that school, the Folk Arts Cultural Treasures charter school. She said the building’s owner turned down offers from developers who wanted to build condos.

“People don’t understand what Chinatown means to the people of this community, people all over the area who consider this their home,” Wei said.

“There are precious few communities, real communities, left in Philadelphia. They are not just geographic; they are about relationships and memories. They are a place-based core that has been systematically destroyed not just in Philadelphia and the U.S.; but around the world,” Wei said. “And once Chinatown is gone, it’s gone. You can’t rebuild it.”