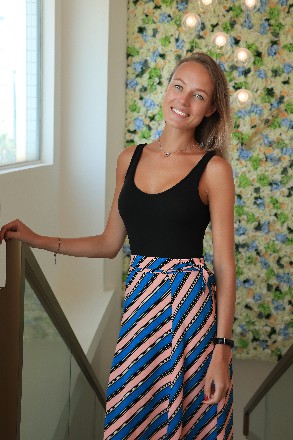 Living in Macau for the past 10 years, Mila Just is a well-known face among the modeling, entertainment, and promotion scenes. Less known is that Mila, who prefers to be known by her first name, came to Macau back in 2006 when the then 20-year-old Saint Petersburg University student said “why not?” to an advert for Russia’s Next Top Model she heard on the radio.
This decision not only changed her life but instilled in her a sense of improvisation and adaptability, which she now employs in a brand-new direction. Among her many ideas for the future, is a recent one to promote Macau as a destination for Russian tourists, which came about while browsing social media.

A chance application in Macau
It was modeling that first brought Mila to Macau.
Participation in the Russia’s Next Top Model competition opened unexpected doors for her and helped her develop new skills, she told the Times.
“In the contest, everything was unexpected,” she said. “We were often given one hour to prepare ourselves for a certain task and we did not know what it was. It could be a photo-shoot or a dance class or anything else.”
This refined her ability to improvise, and to respond to unexpected situations.
Mila explained to the Times that it was with the same spirit that she faced the recent Covid-19 crisis and the cessation of all modeling and performance jobs.
With her newfound spare time, the model decided to “do things that I had wished to do before, but never had found time to do.”
For example, she decided to teach the Russian language to her two children. “I started by teaching them the language as a communication skill and also as a way to keep their culture, but I soon realized that there were other children in Macau that, like them, were born in mixed-culture families and had difficulties learning the Russian language,” said Mila. “So I created this small study group and I have been dedicating a lot of time to this task, which makes me very happy.”
After participating in the TV show, Mila embarked on a modeling career that took her across Asia; from Singapore to Hong Kong to Seoul to Tokyo. She would occasionally visit Macau for either work or sightseeing purposes while working on longer jobs in Hong Kong.
During one of those trips in 2010 – when she was considering taking a break from all of this traveling – she decided to pass her résumé to some of the many integrated resorts that were opening at the time.
A call arrived from Banyan Tree Macau and she seized the opportunity to take a job as receptionist. Within a short time, she moved from reception to taking care of the guests, from their arrival at the airport and during their entire stay.
Through that job she met her husband, an airline captain based in Macau, and the prospect of staying for a longer period in Macau became real.

MUCH TO OFFER THE RUSSIAN VISITOR
Today, Mila has the vision to bring Russian tourists to experience Macau.
As the co-creator of the page “macaoguide” on social media platform Instagram, Mila said that she recently discovered the great interest of Russian people in getting to know Macau.
“The Russian market is a huge window of opportunity; only one person is writing about Macau to Russian people (which is the one doing it for the Macao Government Tourism Office) but that person is not even here, they are in Russia. But I am here, I have been living here for so long and I know Macau and love Macau a lot so I think I can give them a different and more local perspective,” she told the Times.
“For most people [in Russia], Macau is still unknown and people only know that Macau is […] right next to Hong Kong and has casinos, but people don’t know how rich it is and have no idea how ‘crazy’ it is with a mix of cultures and influences.”
The model-turned-blogger added that she now travels everywhere with her phone in-hand, showing Macau to the page followers.
“I believe that as soon as borders open, there will be many Russians interested in visiting Macau,” Mila said, adding that she is so confident about this that she even applied to get an official tour guide license in Macau.
“Macau isn’t that far [from Russia] and people there do like South Asian countries and cultures,” she said. “We are even close to Portuguese culture in some aspects, such as culinary traditions. I think [Macau] will be a perfect destination for Russians.”
Mila said that Russian visitors would be most interested in the “record-breaking” aspects of Macau. “We have so many things, like the most beautiful and largest casinos in the world, the ‘longest bridge in the world’ [the Hong Kong-Zhuhai-Macau Bridge], the Guinness-record holder for the world tallest bungee jump [at the Macau Tower], the beautiful Lisboa [Hotel] and then, of course, Cotai with the replicas of Venice and Paris all in the same place.”
“These will be the number one attractions, but then they will want to see ‘Portugal in Macau’ present in old Taipa, old Macau, the pavements, the ‘pastel de nata’ and all those items that nobody would expect to see in a Chinese city,” Mila said.
She added that in this respect, Macanese cuisine will also be very attractive to Russian palates as, for them, it will have a very “homey” feeling.
With so much to see and experience in Macau, Mila says that these tourists will not be of the single-day traveler variety.