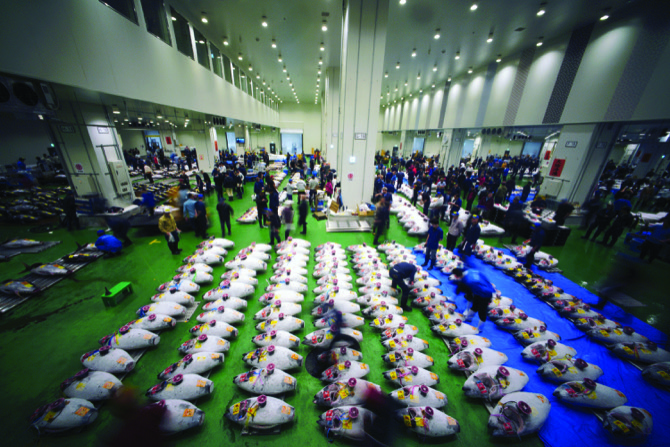 Tokyo’s famous fish market reopened yesterday at a new location but retained its most famous tradition: the tuna auction.

The customary clanging of bells opened the auction for raw and frozen tuna, which crammed the huge warehouse wall-to-wall, at the waterfront Toyosu facility. The rhythmical shouts of the auctioneers and the special hand signals by the bidders that followed were unchanged from Tsukiji, the smaller, more accessible home the market recently left after more than eight decades.

The top bid for tuna, a delicacy much like premium-grade beef in Japan, was 4.28 million yen (USD38,000), not an unusually high price for quality tuna.

The more than 400 kinds of seafood at the market come from all over Japan, as well as from abroad, including octopus, eel, sea urchin and other items special to Japanese cuisine. 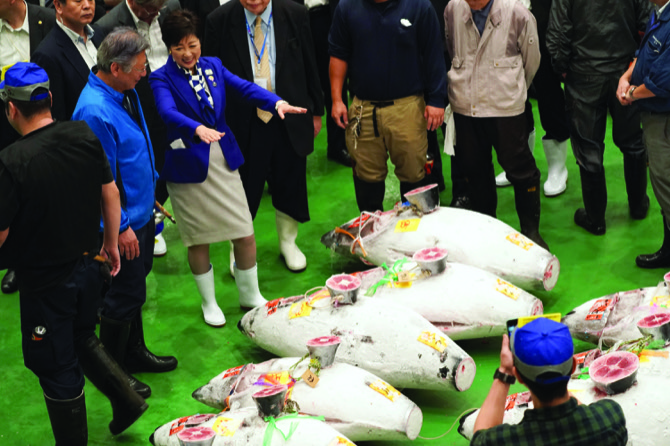 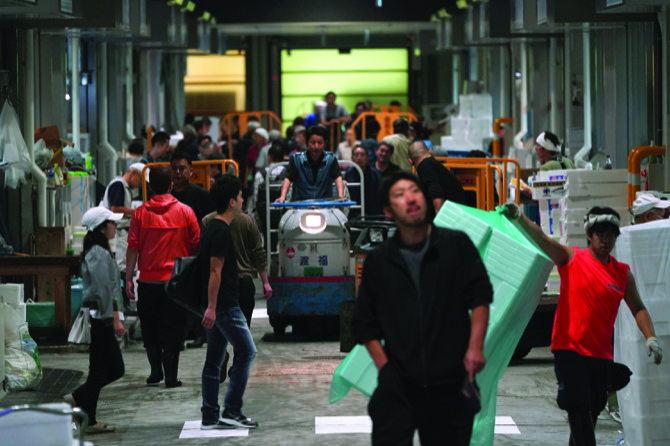 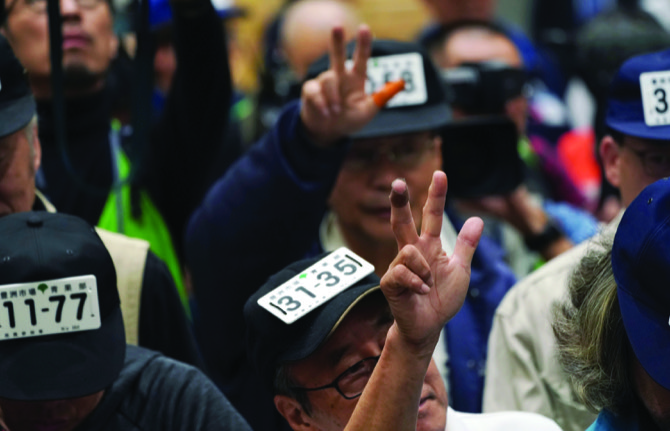 The market serves top restaurants and everyday supermarkets alike. The move was delayed for two years because of worries about contamination, including arsenic, at the Toyosu site. Measures were taken to ensure safety, such as better water pumps and extra concrete sealing.

“Of course, things are different here,” she said of how the new place may take getting used to.

“We must build the Toyosu brand, day by day, to make it a symbol of Tokyo, and of Japan. I hope to move forward with all of you.”

Officials and workers then clapped rhythmically in celebration of Toyosu’s opening, the same customary gesture for good luck that had closed Tsukiji on Oct. 6.

Free-of-charge tours for the public start tomorrow, including seeing the auction from a huge glass window. Visitors will not be able to go on the auction floor as they could at Tsukiji. Reporters got a tour of the grounds yesterday.

Like Tsukiji, Toyosu also has a vegetable wholesale area, where auctions also take place. In several spots in the same market complex are tiny restaurants, including the ones that used to be at Tsukiji but also new ones.

Still, much of the humbly quaint atmosphere of Tsukiji was gone in the sterile factory-like environment of Toyosu. Whether Toyosu can attract tourist traffic remains to be seen.

Serving as reminders were the people zipping around in their scooting carts, as busy as ever.

Toyosu is a bit farther to get to than Tsukiji, which is within walking distance of downtown Ginza. Toyosu is reachable by an unmanned monorail called Yurikamome. A walkway from Shijo-mae station, which means “in front of the market,” leads right to the Toyosu market.

About 40,000 people used to visit Tsukiji each day, not just retailers and restaurant operators but also “salarymen” on lunch breaks and tourists from all over the world.

It’s unclear whether the stalls serving noodles and raw-tuna bowls that remain in the area surrounding Tsukiji will continue to be a draw without the backdrop of a real market.

Many fish wholesalers, workers and supporters had opposed the move out of Tsukiji, alleging that Toyosu was inefficient and unsafe. A handful of businesses were continuing to sell inside Tsukiji, saying they hoped to fight the planned tearing down of the old construction.

Tsukiji is being turned into a parking lot for the 2020 Tokyo Olympics. What gets built afterward is undecided, according to the Tokyo city government. But it’s clearly prime real estate, and plans under consideration include a casino.