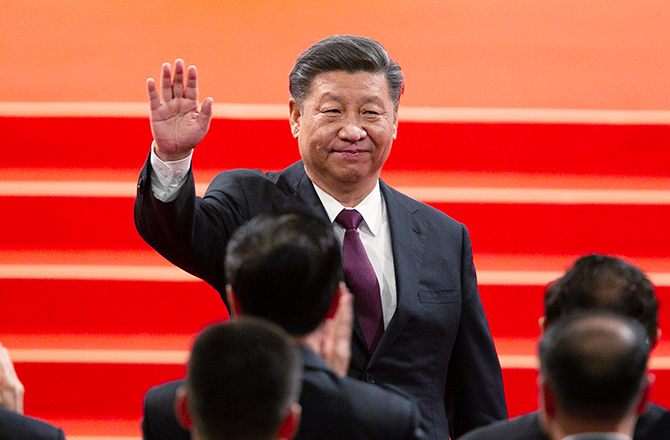 President Xi Jinping is expected to travel to the south of the country to officiate the ceremonies for the celebration of the 40th anniversary of Shenzhen’s special economic zone next month.
Citing unnamed sources, the South China Morning Post reported yesterday that the Chinese leader would make an official visit to Shenzhen to mark the 40 year-milestone of the technology hub’s designation as a special economic zone.
The visit will reinforce China’s commitment to its open-door to the world policy amid the ongoing tensions with the U.S., the SCMP reported.
According to the same sources, the President’s visit to the city of Shenzhen will be followed closely by the business and political elite of Hong Kong, who are expected to take part in the celebrations and may be received by Xi.
Hong Kong Chief Executive Carrie Lam is expected to be among the delegation from the neighboring SAR.
The possibility of the delegation being received by Xi during the visit has been seen by political analysts as a sign of the importance placed on Hong Kong by China’s leadership.
Analysts suggest that if the Hong Kong delegation manages to meet Xi, it is a positive sign from the country’s leadership to the Special Administrative Region, whose government has been under fire for not being able to tackle the social unrest that has lasted for a protracted period.
According to a Shenzhen official cited by the SCMP, the delegation would also include a number of Hong Kong people “who had made significant contributions to Shenzhen’s development” over the past four decades.
The last time Xi met Lam was in December, when she traveled to Beijing to deliver her annual report. At the time, Xi acknowledged the work of the Chief Executive in a turbulent year marked by many anti-government protests.
If Lam secures a meeting with Xi, either on her own or with the Hong Kong delegation during his visit to Shenzhen, analysts say it is a clear signal that the city remains relevant to its neighbor’s future despite the many controversies over the past year that have crippled the city’s economy and left it dwarfed by Shenzhen’s booming growth.
Although Beijing has not yet confirmed the date of the president’s visit to Shenzhen, local officials cited by SCMP say that security and health screening arrangements are being made for a tentative date of September 7.
Another source consulted by the media outlet confirmed that Xi’s visit would take place “in the first half of the month,” as the president would not want to visit too close to the events related to the National Day celebrations that take place on October 1 and usually involve a preparation and planning over the final few weeks.
Lau Siu-kai, vice-chairman of the Chinese Association of Hong Kong and Macau Studies, a semi-official think tank in Beijing, said he believed Xi would find the time to meet Lam and highlight the importance of Hong Kong and Shenzhen working more closely together.
“China’s top leaders have mentioned the importance for the country to rely on the domestic market for growth… and in the face of external suppression, it is also urgent for Hong Kong to strengthen its ties with neighboring cities,” Lau said.
“After the national security law took effect in June, analysts expected Beijing to roll out important measures for Hong Kong’s socio-economic development,” continued Lau. “The president could make use of this opportunity to make it clear the central government remains supportive of Hong Kong, especially when it comes to fighting the pandemic.”