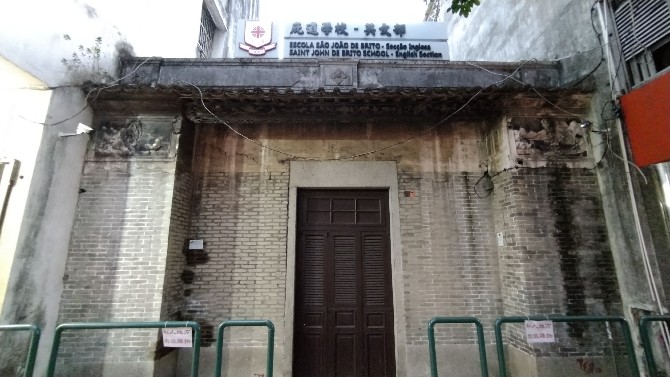 Opinions were divided – even spatially – at an Urban Planning Committee regular plenary meeting yesterday regarding the extent of the preservation of two structures with “historic value,” as some members described them.
Located on Avenida do Colonel Mesquita and Rua dos Mercadores, both structures are now privately owned. Development plans, however, must obtain the green light from the committee, among other government entities, before kicking off.
The first land plot, which sat on the corner adjacent to the Saint John De Brito School, measures 786 square meters. The only remaining structure on the site is a continuous peripheral wall and the façade of the original mansion.
The second plot measures 46 square meters and is located on Rua dos Mercadores. The entire building still exists, with the ground floor being used by a Chinese cakeshop bearing a Hong Kong brand. The entire building has been painted pink.
Opinions came from both sides, not only ideologically but also spatially. It was unclear if the members were seated freely or according to an arrangement, as comments supporting and objecting to the preservation of the two projects coincidentally were raised from opposing sides of the U-shape meeting setup.
Members supporting the preservation of the Avenida do Colonel Mesquita structure, including architect Lui Chak Keong and urban planner Chan Chio I, said that it has significant historic value to Macau because it is the only remaining Xiguan or Lingnan styled garden in Macau.
Although only the wall remains, it embodies the Southern Chinese and Cantonese noble architectural fashion from the Qing Dynasty, the last in Imperial China.
The Cultural Affairs Bureau (IC) supported the description, but argued that the only valuable part of the wall is the one facing the school, now covered with glass panels for the protection of its delicate and detailed patterns.
It even argued over whether the walls can still be considered relics when restored and retained.
Lui responded that not only an entire wall, but also the main entrance and façade to the original mansion are still present. Meanwhile, he questioned the fact that the IC has reconstructed many valuable turquoise porcelain structures in the name of conservation.
Indeed, the IC has used new concrete to fix the three deteriorating arches at the Ruins of St Paul’s, which was a granite structure.
Some members suggested relocating the façade into the lobby of the new development, for instance, as a contingency preservation measure.
The pink building on the Rua dos Mercadores is an embodiment of a modern urban planning effort in the early 20th century, as introduced by Lui. Before that, structures in Macau were liberally stippled.
It also has a western shop-house style with details of Chinese architectural style incorporated. The architect remarked that the building is the only remaining one of its kind across the city.
Taking a step back, both Lui and Chan proposed that the façade be preserved in the worst-case scenario.
Another member, architect Omar Yeung, said that, using Paris as an example, old and new buildings can be juxtaposed, as long as the new ones are blended into the new ones. However, he also noted that it takes time and resources.
In relation to blending old buildings with new developments, some members raised the Banco Nacional Ultramarino Building on Avenida da Almeida Ribeiro as an example of “organic integration.”
The IC pledged that before deconstructing any structures which cannot be kept, a process of digital documentation will be conducted to retain records of the structures and styles.
The committee also discussed two facilities for public use, namely the Central Kitchen Waste and Grease Treatment Facility as well as the reconstruction of the Meteorological and Geophysical Bureau’s building.
Regarding the draft of the kitchen waste handling facility, which will be located near the Macau International Airport, a member of the committee was concerned about the environmental impact of the project. She asked the Environmental Protection Bureau (DSPA) to explain its work on the environmental impact of that project.
Evaluation of the environmental impact of the project will be conducted, the DSPA representative promised, and there will be a waste management facility with a capacity to handle 220 tons of waste, and a wastewater facility able to handle a maximum of 420 cubic meters of liquid.
The representative also pledged that all designs will abide by environmental protection requirements.
As for the latter project, the DSPA has added to the 12,903 sqm project a requirement for the assessment of its environmental impact.