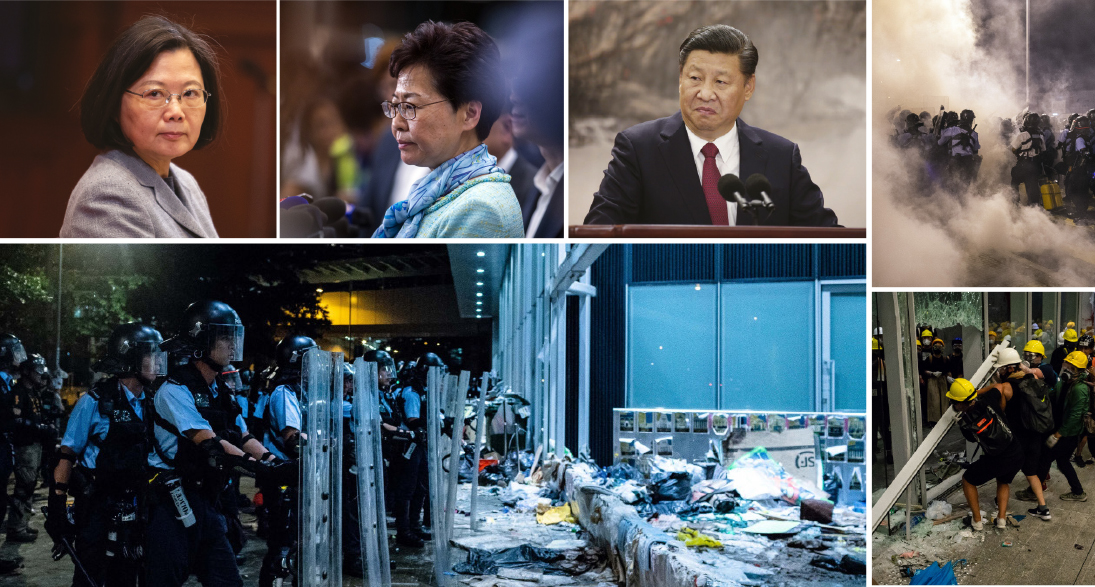 The protesters who succeeded in halting Hong Kong’s controversial extradition bill benefited from broad support among businesses and ordinary citizens. But Monday night’s ugly demonstrations risk losing some of that backing – and giving a boost to the pro-Beijing leader they despise.

Asia’s financial capital was cleaning up its downtown Tuesday after protests coinciding with the anniversary of its 1997 handover to China morphed into a raucous takeover of the Hong Kong Legislative Council, its quasi-democratic legislature. Protesters wearing hardhats and protective goggles smashed their way into the building, spray-painting “HK IS NOT CHINA” on the walls and draping a colonial-era flag over the dais. Hours later, police stepped in to clear the streets with tear gas.

For Hong Kong Chief Executive Carrie Lam, the mayhem could prove useful. Few in the city – and particularly not among the local and foreign investors whose concerns helped torpedo an extradition bill that triggered protests last month – are likely to support actions that disrupt daily business. The American Chamber of Commerce in Hong Kong, which opposed the bill, issued a statement Tuesday saying “violent acts causing physical harm and destruction of property” were an unacceptable way for people to express their concerns.

By allowing Lam to paint activists as violent rabble-rousers and position herself as a guardian of order, the protest may give Lam a new lease on political life. The chief executive was badly weakened, her approval rating at a record low, after her retreat on the extradition legislation, which she shelved last month after historic crowds turned out in opposition.

“Beijing is more unlikely to yield now than before and exert a more hard-liner approach,” said Ivan Choy, a senior lecturer of government and public administration at the Chinese University of Hong Kong. “Beijing will continue to back Carrie Lam and the police force to ensure stability.”

Lam held a 4 a.m. news conference to condemn the legislature takeover, describing it as an “extreme use of violence and vandalism” and “something we should seriously condemn because nothing is more important than the rule of law in Hong Kong.” Her language echoed that of many opponents of the extradition bill, who warned that by creating a path to remove criminal defendants to mainland China, the city would destroy its status as a safe haven of judicial independence and individual rights.

Monday night’s chaos also may prove convenient for Chinese President Xi Jinping, whose government argues that only tight control can ensure the stability necessary to support economic growth. From the beginning of the anti-extradition protests, Chinese officials portrayed those in the streets as illegitimate agitators and foreign agents – the sort of people who, in Beijing’s view, need to be brought firmly in line.

The Chinese government condemned the protesters who stormed the legislature as “extremists” and called for their criminal prosecution, according to the official Xinhua News Agency, which cited a spokesman for the Hong Kong and Macau Affairs Office. While both Chinese and Hong Kong authorities say there’s no need for the People’s Liberation Army to intervene, such scenes test Beijing’s tolerance for unrest.

The activists who took over the legislature by no means represent the mainstream of Hong Kong’s pro- democracy supporters – hundreds of thousands of whom marched peacefully Monday in one of the largest protests ever. Activists have been split in recent years between more hardcore “localists,” who demand greater autonomy, if not independence, and a larger group that’s more ambivalent about Chinese rule.

The power of the anti-extradition protests was derived, in part, from collapsing that distinction: focusing on just one issue allowed competing factions to come together in opposition to Lam’s proposed bill.

Pro-democracy lawmakers accused police of setting a trap for protesters by withdrawing from the legislative complex and giving them a clear path in. The city’s police commissioner, Stephen Lo, said officers retreated out of fear for the safety of bystanders and themselves after protesters tampered with electrical boxes and threw “toxic powder” at police.

Police didn’t return to the site until well after midnight, eventually firing tear gas while charging at protesters to clear them from the streets around the building. By morning, Hong Kong’s government district resembled a post-apocalyptic movie set, with dump trucks removing the detritus of metal railings, umbrellas and thousands of discarded water bottles. Cleaners inside the Legislative Council picked up smashed official portraits and started removing trash and graffiti.

The legislative chief, Andrew Leung, said the chamber was a “crime scene” and the damage would require the body to cancel the remaining two meetings of its session.

Western governments were anxious to prevent the violence being used to discredit the larger push for maintaining Hong Kong’s special status. “The actions today of a small number of people,” the European Union said in a statement, “are not representative of the vast majority of demonstrators, who have been peaceful throughout successive protests.”

As central Hong Kong returns to normal, activists now face the dilemma of how to regroup. While the extradition bill is unlikely to be reintroduced in the near future, the broader crackdown on Hong Kong’s unique freedoms likely will continue – and with it protesters’ determination to resist what they view as encroachment by Beijing.

“In the coming weeks, we will see very large hit back from the Beijing side and turn into a security issue,” opposition lawmaker Eddie Chu told Bloomberg Television. “I’m afraid in the long run Hong Kong will become a police city.” Matthew Campbell & Fion Li, Bloomberg

A boost to Tsai in Taiwan

Recent anti-government protests in Hong Kong are echoing in Taiwan, possibly giving the island’s President Tsai Ing-wen a lift in her campaign to resist Beijing’s pressure for political unification and win a second term in next year’s elections.

China’s “one country, two systems” framework has never found much support among Taiwan’s independence-minded voters. Events in Hong Kong now seem to be handing Tsai even more ammunition to attack opponents who argued that an accommodation with Beijing could be reached.

The Hong Kong protests “highlight that the system clearly designed to entice Taiwan into unification talks has been a dismal failure,” said Western Kentucky University political scientist Timothy S. Rich, a close observer of Taiwanese politics. The emphasis on sovereignty and independence should benefit Tsai and her party by shifting the discussion away from contentious domestic issues such as stagnating wages and reductions in civil service pensions, Rich said.

“Tsai can use the Chinese threat to Hong Kong to reposition herself and her party as protecting democracy, that it is right to be cautious in regards to China and cross-strait relations,” Rich said.

In a January speech panned across Taiwan’s political spectrum, Xi again endorsed “one country, two systems” as Taiwan’s future, while asserting that the ruling Communists “made no promises to abandon the use of force” to bring Taiwan under their control.

“Does this benefit Tsai? Perhaps indirectly in the sense that it may complicate her opposition’s efforts to find a more positive formula for relations with the mainland,” said Steven M. Goldstein, director of the Taiwan Studies Workshop at Harvard University’s Fairbank Center for Chinese Studies. mDT/AP