World Views | An ominous collapse casts a shadow over Brazil 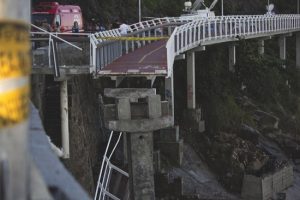 In a continent lashed by deadly flash floods and still reeling from a 7.8-magnitude earthquake in Ecuador, the collapse of an elevated bicycle path in Rio de Janeiro on Thursday might seem a smallish sort of tragedy. But Brazilians know better.
Late Thursday, authorities were still puzzling over the cause of the accident, in which a large wave crashed against a cliff, ripped away a 160-foot section of the bike lane, and tossed it into the sea, killing at least two people. Rescue crews on Friday were still searching for three others.
The wider disaster was hard to miss. The 2.5-mile track, which winds around a steep coastal cliff, was built as part of a suite of sweeping urban improvements ahead of the 2016 Olympic Games.
For two years running, Latin America’s largest nation has been convulsed by nothing but miserable news. Its economy is in tatters, the president may be forced out of office, and a rolling corruption scandal has shattered the reputations of moguls and political legends.
But there was always Rio. Back in 2009, when the International Olympic Committee announced that this legendary seaside city would host for the 2016 Summer Olympic Games, the country was elated. Back then, Brazil was on the rise and eager to show the world how far it had come. And what better way to celebrate than to stage the globe’s most prestigious sporting event against the granite plinth of Sugarloaf Mountain and majestic Guanabara Bay, or on a cycling course built over the pounding Atlantic? Even as Brazil stumbled, Rio seemed charmed.
City authorities hurled up bridges, expressways and sports arenas at a frantic pace. In a land known for construction delays and huge cost overruns, there were doubts: The nation’s biggest corruption scam on record, after all, was wrought by the continent’s biggest builders, some of whose directors have been convicted for padding budgets, gaming public works contracts, and paying kickbacks to politicians for sweetheart deals. In 2014, International Olympics Committee vice president John Coates returned from a site visit to describe Rio’s preparations as “the worst” he’d ever seen. And that included the 2004 Athens Games, which set the benchmark for chaotic delays and construction glitches.
And yet Rio’s ambitious mayor, Eduardo Paes, seemed to skate above the turmoil. Although senior members of his party, the Brazilian Democratic Movement, have been targeted in corruption investigations – including the Senate president and the speaker of the lower house of Congress – Paes remained untainted and apparently untroubled. He seemed genuinely to relish the limelight, scurrying around the city in shirtsleeves to inaugurate parks, arenas and public works, and waving off worries that the city would not be ready for the Olympic opening ceremony in August.
Not surprisingly, his name has often come up as a promising candidate for the 2018 presidential elections, and delivering a successful Olympics would only lift his chances.
By early April, in fact, he boasted that 95 percent of the building was done. One of the handsomest of the Olympic oeuvre was the cliff-hugging cycle course, which provided “stunning views” of Rio’s sinuous south zone beaches, as Rio 2016, the city’s Olympics organizing committee, boasted. The USD12.7 million course was opened to the public in January, and was a favorite for city cyclists and tourists alike.
So far there’s no evidence that official negligence was behind the collapsed bike lane, although José Schipper, vice president of Rio’s regional council for engineering and agronomy, told the cable news channel GloboNews that faulty engineering or construction could explain the accident. Mac Margolis