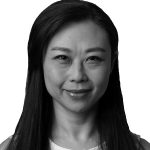 In 2018, when Chinese President Xi Jinping visited one of Tsinghua Unigroup Co.’s mega memory-chip factories in Wuhan, he said that semiconductor processing is the heart of a nation’s manufacturing industry. Well, that heart just skipped a beat.
Unigroup, a commercial arm of the prestigious Tsinghua University, Xi’s alma mater, missed a payment on a 1.3 billion yuan ($198 million) note Monday, adding to a lengthening list of [state-owned enterprise] SOE defaults. Investors are now left guessing: What type of SOEs will Beijing support? How much money can we claw back in the event of a default?
It will be a game of hide and seek. There’s now a deepening suspicion that SOEs will transfer good assets out before creditors drag them to court. A few days before its default, Unigroup pledged a 16.14% stake in smart-card chip designer Unigroup Guoxin Microelectronics Co., worth about $1.4 billion, to Bank of Beijing for a 10 billion yuan credit line. But that credit line had already been signed at the beginning of the year, and Unigroup reportedly didn’t receive fresh loans in return. This echoes similar moves from two large regional SOEs.
And where’s all the cash these companies claimed on their balance sheets? Yongcheng Coal & Electricity Holding Group Co.’s default on a 1 billion yuan note on Nov. 10 came as a surprise. As of June, it sat on close to 50 billion yuan of cash; only 360 million yuan was restricted as term deposits with Ping An Bank Co., the company disclosed a month ago. In late October, Yongcheng raised a 1 billion yuan three-year note, with a AAA-rating from a local agency. So traditional credit analysis, such as looking at whether a company has enough cash to cover short-term debt, doesn’t work.
Investors all know SOEs’ ubiquitous AAA ratings are a joke. In the past, they tried to differentiate bond issuers by their geographical locations or the nature of their business operations. Companies from impoverished provinces that have a track record of defaults, such as Liaoning, Tianjin or Qinghai, were shunned. Meanwhile, SOEs that controlled assets with national strategic value were sought after.
The latest wave of defaults proved them wrong. Yongcheng, which has 24.4 billion yuan of bonds outstanding, is an SOE from the fiscally healthy Henan province. Meanwhile, Unigroup controls one of the Chinese semiconductor industry’s two crown jewels: Its flash-memory chip factory in Wuhan is cutting-edge.
One question is why Beijing is allowing SOE defaults now. Bear in mind, Xi always wanted to carry out this painful corporate deleveraging campaign. He started in late 2017, but got derailed by President Donald Trump’s trade war and then the Covid-19 outbreak. Now, both roadblocks are gone.
From a politician’s eye, defaults can just be a quicker way to enforce SOE reform. As long as quality assets are hidden away, companies can go into bankruptcy court and emerge leaner. Local courts are part of the government, anyhow. Debtholders will just have to nurse their wounds.
Last Friday, when Unigroup was proposing to extend its due date, parent Tsinghua Holdings’ Chairman Long Dawei said “Unigroup is not standing alone” as a show of confidence, Debtwire reported. That might be. But these SOE defaults and restructurings are also leaving investors isolated and in the dark, with no faith or assets to hold onto.