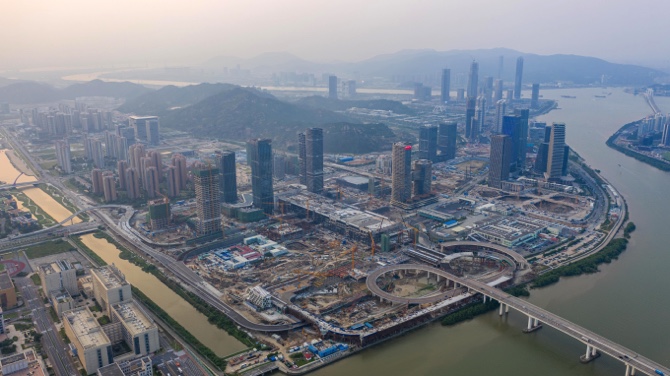 Chan Chi Fai, a staff member with the General Union of Macau Residents Associations (GUMRA), moved his office in November to Hengqin New Area in the neighboring city of Zhuhai, Guangdong Province, to better serve Macau residents living there.

“We work as a bridge between Macau residents living in Hengqin and local neighborhood committees and government departments,” Chan said in an interview with Xinhua.

He often visits Macau newcomers, listens to their appeals and gives feedback to the local neighborhood committees.

Chan and three other experienced colleagues moved to Hengqin after the GUMRA opened its Hengqin service center in November.

The general union is one of the largest civil organizations in Macau, providing social welfare services, such as elderly care and family counseling.

In 2018, it opened an office in the city of Zhongshan, marking the first branch of Macau’s non-governmental organizations on the mainland.

As a growing number of Macau residents chose to work and live in Zhuhai, Zhongshan, and other cities in the Guangdong-Hong Kong-Macau Greater Bay Area (GBA), they have called for more services for housing, medical care and education.

In Hengqin alone, Macau residents have purchased nearly 6,000 properties of various types, according to Xinhua. As of September, more than 2,000 Macau students were studying in universities in Guangdong.

Covering an area of about 2,200 square meters, the Hengqin service center features an entertainment room for the elderly, a children’s recreation room, a toy library, a reading room, a multifunctional activity room and a counseling room.

“Cooperation between Hengqin and Macau has gradually expanded from the economic field to the areas of livelihood and social services,” said Ng Siu Lai, president of the GUMRA.

Fu Ji Wen, a 61-year-old Macau taxi driver, and his wife have become regular commuters between Hengqin and Macau after they bought a 130-square meter apartment four years ago.

Unfamiliar with local conditions in Hengqin, they came cross difficulties from time to time. “Our requests have been responded quickly since the arrival of Chan and his colleagues,” Fu said.

“We are like accelerators to help Macau residents integrate into Hengqin,” Chan said.

According to the development plan, Hengqin will provide houses and apartments for 10,000 Macau households. With the improvement of public facilities, more and more Macau residents are expected to move to Hengqin for living, studying and working.

So far, more than 300 Macau residents have participated in the basic medical insurance system provided by the local government in Zhuhai, which could only be enjoyed by local residents in the past.

“We are proud of contributing to making the GBA a livable place and suitable for work and travel,” Chan said. Hu Yao, Zhou Qiang, Xinhua