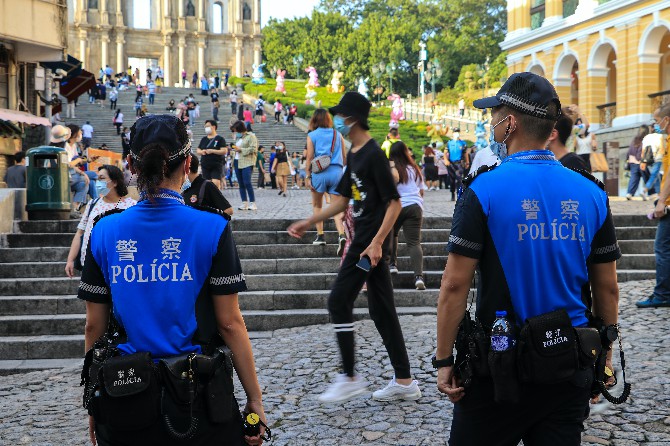 A local 22-year-old male has been arrested by the Public Security Police Force (PSP) under suspicion of aiding and profiting from the work of at least two mainland prostitutes, the PSP spokesperson informed yesterday during the joint press conference of the police forces.
According to the PSP, due to the resumption of Individual Visit Scheme (IVS) visas for the mainland citizens, Macau has been registering an increased number of visitors, leading the police to increase their vigilance and patrols in several areas of the city and more specifically in Cotai.
During one of these patrols, officers spotted a vehicle driving around several hotels in Cotai with a woman dressed provocatively as a passenger. On October 17, at around 7 p.m., the officers found a woman getting out from the car and entering a hotel in Cotai.
Making use of the hotel’s surveillance cameras, the police discovered that the woman went to a room only to leave a few minutes later.
The police officers then questioned the hotel guest, who told the officers that the woman was offering him sex services. He had refused and she had left.
Later that day, the PSP saw the same car drive a different woman to another hotel. When the second woman left the car, the police intercepted the whole group.
Taken into questioning, both women told a similar story to the police. They claimed to have entered Macau on tourism visas to gamble but decided to engage in prostitution activities after losing all their money in the casino.
They also said that the man offered to transport them and to provide food and condoms for a daily fee of RMB300.
They also said that they paid this man through a mobile payment application. The women also claimed that they did not know each other but were aware that other women were also receiving help from the local man.
During questioning, the man admitted that he had begun providing this service on October 15, and that up until the time he was caught, he had received about HKD3,000 in total from different women.
He also admitted to receiving extra gratuities from some of the prostitutes, but claimed that he did not request such payment from them.
All three are considered suspects of crime and their cases are being transferred to the relevant departments.
While the man is being accused of facilitating, providing help, and supporting prostitution activities, the women are being accused of performing work for remuneration while on a tourism visa, which falls under the provisions for illegal work.