Zhuhai | Macau’s neighbor aspires to be a model for education 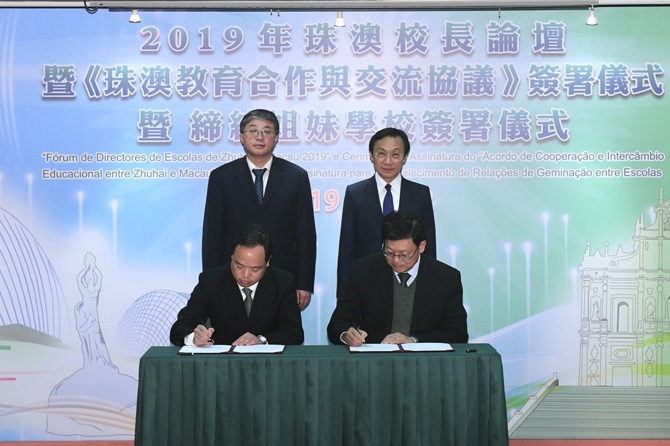 Macau’s Secretary for Social Affairs and Culture, Alexis Tam (right, standing), presides over a signing ceremony for a Zhuhai-Macau educational cooperation and exchange agreement at the Forum of the School Principals of Zhuhai and Macau event yesterday

The neighboring city of Zhuhai aims to be an example and a role model in the fields of education and training for the entire Guangdong-Hong Kong-Macau Greater Bay Area, said the director of the Zhuhai Education Bureau, Lin Rituan.

Lin spoke at the Forum of the School Principals of Zhuhai and Macau, which took place at the Education and Youth Affairs Bureau (DSEJ) yesterday morning.

“Currently, the city of Zhuhai is focused on the improvement of the quality of education to become a model in education in the Greater Bay Area,” Lin said. “We hope to realize a good outcome from our operations, talks and exchange activities.”

The event also included the signing of a cooperation agreement on exchanges between several schools in Macau and Zhuhai, in the presence of around 120 school principals from both sides of the border. Lin noted that it was a moment that marked “the start of a new chapter on educational collaboration” between both cities.

Lin referenced Chinese philosopher Confucius, saying that exchanges between both sides of the border could help to find solutions “for mutual problems we have in our schools” and “learn from one another to compensate our own weaknesses,” remarking that this was the main goal of China’s century-long education master plan.

The director of the Zhuhai Education Bureau emphasized the fact that aside from being close neighbors, Zhuhai and Macau also share a profound friendship and excellent relations which have contributed to the success of the twin-schools program.

“The number of participating schools in twinning projects has been growing rapidly. Just in 2019, there was a growth of 10 schools, which means that this year there have already been 14 schools that have signed this agreement, with some of them having decided to do so by their own initiative,” Lin recalled. “Through exchange, we can learn more and better from one another, establishing a profound and long-lasting friendship. We need to have closer cooperation in the improvement of education and training.”

Without specifically addressing which topics had been discussed, DSEJ director Lou Pak Sang noted that several matters related to the development of education between the regions were discussed during the Forum. Lou noted that this opportunity for exchange between the school principals of Macau and Zhuhai aimed to enforce new policies and measures to benefit successive generations on both sides.

The DSEJ director said that although each school has its own characteristics and there is no fixed recipe for success in education, the exchange and sharing of experiences and ideas can be beneficial to everyone.

According to information provided by the DSEJ, the main topic at the forum was “education integration” within the Greater Bay Area, with the purpose of studying the development of non-tertiary education between Macau and Zhuhai to reinforce educational policies and school management strategies that promote school harmony.

There were education specialists, scholars and school principals at the forum who shared their experiences and opinions on education, training and talent development in the Greater Bay Area.