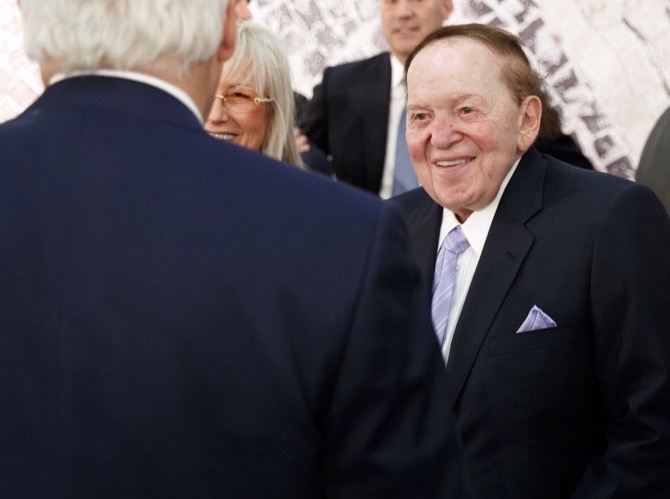 Sheldon Adelson (right) talks with Secretary of State, Rex Tillerson, before a speech by President Donald Trump at the Israel Museum in Jerusalem

After decades as one of the biggest magnates on the Strip – presiding over properties like the Venetian and before that the Sands, an old stomping ground for Frank Sinatra – the billionaire’s love affair with Vegas appears to be ending. As Bloomberg reported, Adelson has hired an adviser to sell his properties in the city. Asking price: at least $6 billion.

A sale of the resorts, which is far from certain, could come at a difficult time for America’s gambling capital. The city has been hit hard by the coronavirus, with visitors down 55% this year and casino revenue on the famous Strip off by 45% through August.

While casinos were allowed to reopen in early June, customers – especially those who travel by plane – are only slowly coming back. MGM Resorts International announced plans to lay off 18,000 workers in late August, many of them in Las Vegas. Wynn Resorts Ltd. said this month it was closing its Encore resort during the slow midweek days.

Even the city’s big casino trade show started today (Tuesday) in a virtual format. Until consumers feel freer to travel and spend, the opportunities in Las Vegas may be limited, Sands executives said during a conference call last week.

“I don’t see a lot of things in Las Vegas for us until there is a change structurally,” said Rob Goldstein, the company’s president.

If Sands were to sell its Nevada properties, it would represent an exit from the U.S. casino business – at least for now. The bulk of its revenue already comes from Macau and Singapore, and the company has plans to spend another $5.5 billion in those markets. The U.S. was already a small and shrinking part of his business, accounting for less than 15% of revenue last year.

“The growing insignificance of the U.S. market explains to you why Las Vegas Sands is looking to offload their U.S. properties,” said Ben Lee, a Macau-based managing partner at IGamiX. “It is 15% of revenue but 80% of regulatory pain and burden.”

A recovery in Asia helped improve Sands’ operating results in the third quarter, Adelson said in an earnings call last week. In Singapore, Marina Bay Sands had a profitable quarter as operations progressively resumed across the resort during the summer.

The money from a sale could allow the company to fund other development opportunities. Sands dropped out of the competition to build a casino in Japan earlier this year due to terms executives described as unfavorable. Adelson, 87, has expressed interest in building in New York City, an opportunity that could arise next year.

A spokesman for Sands said the company intends to keep its headquarters in Las Vegas. Adelson, who in good years has paid himself $1 billion or more in dividends, appreciates the lack of a state income tax in Nevada. His family owns the local newspaper, the Las Vegas Review-Journal, and has multiple homes in Malibu, California, a short private jet flight away.

“Sheldon’s a businessman first and foremost,” said Sig Rogich, a former public-relations adviser to Adelson. “He does not let sentiment get in the way of good business dealings. He’s always been a buyer and seller.”

Indeed, Sands sought buyers for the company’s casino in Bethlehem, Pennsylvania, in 2013, but withdrew when it didn’t get the price it wanted. Five years later, it sold the property for $1.3 billion.

The Venetian was the first resort Adelson constructed. He built it on the site of the former Sands casino, which he had purchased in 1988 so that he could build a convention center next door. The $1.5 billion Venetian was among the most expensive hotels in the world when it opened in 1999. Eight years later, Adelson added the Palazzo, a $1.8 billion adjacent resort with its own casino.

Adelson, who made his first fortune in Las Vegas running the Comdex computer industry trade show beginning in 1979, pioneered the concept of linking casinos with meetings and convention space. Casino operators at the time thought the conventioneers weren’t big gamblers and didn’t specifically cater to them. The oversized suites in the Venetian were specifically aimed at business people, with work and meeting space, and amenities such as fax machines. Other casinos soon copied Adelson’s formula.

He was also an early adopter of a build-and-sell model, offloading the retail space at the Venetian in 2004 to help finance his expansion into Macau and Singapore.

Adelson, who received treatment last year for non-Hodgkin’s lymphoma, has been an undeniable presence in Las Vegas. He fought to lure a National Football League team to town with a new stadium (the Raiders moved there without him). He also opposed a monorail that he didn’t think was a good investment (it went bankrupt twice and doesn’t stop at his casinos).

Jan Jones Blackhurst, a former mayor of Las Vegas and current board member of rival Caesars Entertainment Inc., said that if someone does pay Adelson’s asking price for the properties, it will be a sign that investors are still interested in the city.