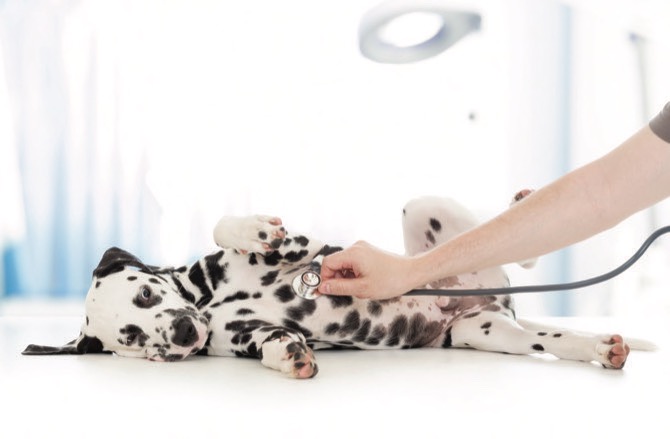 Its viral season in Macau and for many years canine distemper virus was the most feared of the viral diseases affecting dogs. Parvovirus may have surpassed it in this regard but it is still a deadly virus that kills dogs and other members of the canine family.

Canine distemper virus is an RNA virus from the morbillivirus family. Distemper virus is more likely to affect puppies than older dogs. This is probably due immunity acquired through CDV Vaccinations or exposure to the virus naturally, leading to immunity. It can affect dogs of any age, though. It causes very variable clinical signs which makes ruling it out in a young sick dog a difficult process. In some dogs a transient fever, perhaps accompanied by a lack of appetite or mild depression may be the only signs of onset of distemper. Other dogs are affected by a systemic illness with nasal and ocular discharge, coughing, fever, depression, lack of appetite, vomiting and diarrhea. It is not uncommon for dogs to have some but not all signs associated with this disease.

Since the inapparent infections often go undiagnosed and the severe infections often are present in dogs who die from distemper virus, the mortality rate of canine distemper was always thought to be very high. Over time, it was recognized that a number of dogs were surviving the initial infection only to develop neurologic signs from one to a few weeks after infection. Dogs that survive both the initial infection and subsequent neurologic disease may go on to develop retinal damage, corneal discoloration or extreme hardness of the skin of the nose or foot pads. Infection with the distemper virus can be hard to diagnose with certainty but we currently have ELISA kits that are quite sensitive to the antigens.

It is not uncommon for puppies with suggestive clinical signs to have a recent vaccination for the virus. This makes it hard to judge infection by antibody titers in many instances. There is a latent period from the time the virus enters a dog’s body until clinical signs appear of approximately 9 to 12 days which means that puppies already infected may be vaccinated before clinical signs appear.

Sometimes the virus can be identified in infected tissues using immunofluorescent techniques. This works in the white blood cells several days after infection and in conjunctival (the pink part of the eye area) swabs up to 21 days after infection. Inclusion cysts may be seen in conjunctival swabs as well. General blood chemistry and blood cell count values are usually pretty uninformative when distemper is present. Cerebrospinal fluid (CSF) taps may indicate antibodies to distemper virus and increased protein. X-rays may show signs of pneumonia that are typical for viral infection but not definite for distemper virus alone. In many instances the course of the disease finally provides the diagnosis as initial signs of a generalized illness change to neurologic signs over time.

Some strains of distemper vaccine provide nearly lifelong immunity after the initial series and one-year booster while other strains provide a shorter duration of immunity. Some puppies develop signs of canine distemper following vaccination even though they do not appear to have the disease. In these puppies encephalitis occurs. This can be fatal, although most puppies probably recover. Canine distemper virus is shed in all body secretions from infected animals. Dogs may spread the virus for several weeks during the illness and subsequent recovery period. The virus is not especially stable in the environment, probably lasting no more than a few weeks. It is susceptible to disinfectants, especially the quaternary ammonium compounds such as TH4 and Vircon.