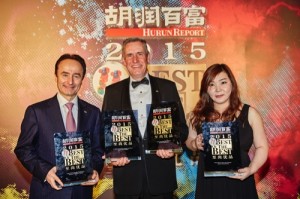 The Hurun Report “Best of the Best Awards” ceremony was held on 29 January in Shanghai. Mandarin Oriental, Macau was honored as “Luxury Hotel in Macau Star Performer”, with Mandarin Oriental Pudong, Shanghai and Mandarin Oriental, Guangzhou receiving the “Luxury Hotel in Shanghai Star Performer” and “Art Lifestyle Luxury Hotel in Guangzhou Star Performer” awards, respectively. Michael Hobson, Chief Marketing Officer for Mandarin Oriental Hotel Group, attended the event and received the Group’s “Luxury Hotel Brand Star Performer” award.
According to a Mandarin Oriental press release, the Hotel Group has a “reputation for excellence” in the hospitality industry and has established hotels around the world that “offer creative design and architecture, innovative dining and holistic spas, all underpinned by its renowned legendary service”. In 2013, the Group opened two new luxury hotels on the mainland, in Guangzhou and Shanghai, and in 2014, opened a hotel in Taipei, Taiwan, thus extending its brand to guests across the Greater China region. The Group has also announced hotel projects in Shenzhen, Chengdu and Chongqing, all of which will open in the next few years.
“We are delighted to have received this prestigious award,” said Mr Hobson. “This recognition shows that Mandarin Oriental’s renowned brand of luxury hospitality combined with oriental charm has set an industry benchmark in the Chinese market.”