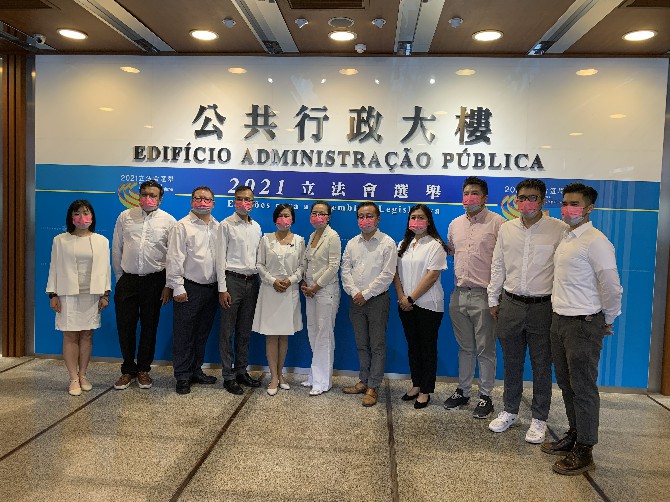 Yesterday, Agnes Lam, an incumbent lawmaker and leader of local association Macao Civic Power, submitted nominations for this year’s Legislative Assembly Election, which will take place on September 12.
As in previous elections, the lawmaker, alongside her list, will run under the name of Civic Watch. Lam revealed that the team will consist mostly of professionals from various industries, such as education, culture, engineering, medicine and law.
At least two individuals who have previously run alongside Lam were present at yesterday’s nomination submission, among them Portuguese architect Rui Leão and team building specialist Brian Tang.
The incumbent lawmaker did not disclose who will be included in the list, but said that the actual listing will be announced at a later date. For the time being, the group will focus on collecting opinions from the general public as the foundation of the list’s election platform.
Currently, Lam expressed that she is encountering challenges with acquiring information about the public’s actual needs. She explained that circumstances were ever-changing under the pandemic, meaning that the public’s requirements from candidates fluctuated.
As such, she hopes her election platform will be able to include voices from all walks of life.
When questioned about the Electoral Affairs Committee’s decision to restrict nominations from the civil servant sector, she admitted that, prior to the relatively late announcement of the decision, the group had received nominations from some civil servants.
“We had to withdraw these nominations from our collection, so that the actual time taken to collect nominations was longer than our original expectation,” Lam explained.
As to how many seats the lawmaker aims to get, she said her team would save no effort in getting as many seats as possible. Although she has confidence, she will be cautious at the same time.
Lam was elected to the parliament in 2017 with 9,590 votes. AL