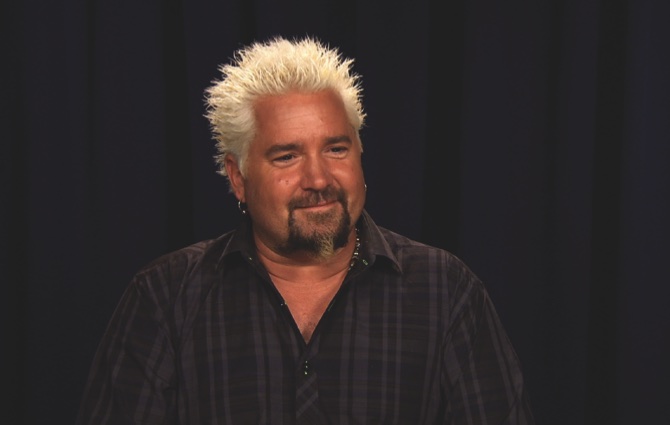 Of all the celebrity chefs out there, there’s one you’d least expect to sing the praises of spinach, kale and Brussels sprouts. That would be Guy Fieri.

The spiky-haired champion of American comfort food is more associated with greasy chili dogs than salad, the fryer over the fig. But are you sure you know all the sides of this guy?

“I’m a big greens fan. I’m a big vegetable fan. I’m a big whole grains fan. And I exercise a lot. That’s how I keep this petit dancer’s figure,” he said, laughing. “A lot of people misinterpret what I do.”

Fieri has built a food career on a certain amount of flash — a rock star image complete with tattoos and jewelry, a fleet of yellow muscle cars and high-octane dishes including Bacon Mac ‘n’ Cheese Burgers.

But he’s also raised a family in the same Northern California house for the last 20 years, eats a burger maybe once a month, considers culinary innovator Jose Andres a hero, and says things like “I cannot get enough farro.”

Both sides are on display in his new cookbook, “Guy Fieri Family Food ” (William Morrow), with recipes that range from Chicken Bacon Ranch Pizza to Quick Cracked Bulgur Wheat Salad. It’s what his family eats, with tips on how to stretch leftovers into several meals.

“It kind of moves all over the board,” said Fieri, who started with 200 recipes and whittled them down to 125. “It was a full-blown family project with everyone involved and picking what they liked and didn’t like.”

Fieri broke into the mainstream after winning “The Next Food Network Star.” He went on to put his name on more than 30 restaurants across America and Mexico. His best-known Food Network show is “Diners, Drive-Ins and Dives ,” where he celebrates small eateries that make dishes from scratch. 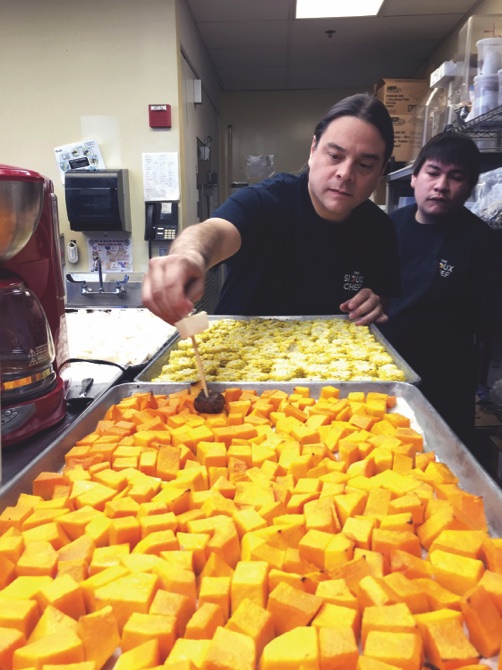 The show has created what’s called the Fieri Effect, a boost in restaurant revenues after he shows up. “I feel like the guy that gets to bring the Publisher’s Clearing House check to the door, you know?” he says. “It changes their lives. It’s not just giving them money. It’s giving them recognition.”

But as much as Fieri is cheered by fans for his down-home approach to unfussy fare, he’s also dismissed by foody elites who find his manner brash and culinary skills lacking. The New York Times in 2012 had a scathing takedown of his Times Square restaurant, asking: “Is the entire restaurant a very expensive piece of conceptual art?”

“I have to take the high road,” responds Fieri. “Everybody has their role in the food world and what they choose to appreciate. I’m not a fine dining chef. I appreciate it. I think Thomas Keller is amazing,” he says. “But I really like where I’m at, I like what I do. I like how it makes people feel.”

Fellow Food Network chef Alton Brown sees professional jealousy as the fuel of the anti-Fieri fire: “There are people who have plied their trade for a long time in the culinary world that might see a guy that won a food competition show and, all of a sudden, is a superstar. They resent that. They want to guard the turf and the purity of the turf.”

Fieri embraces a laid-back, communal approach to cooking. He’s not exactly hunting for the next food trend. “I try to keep my eyes and ears open. I don’t feel that I have to be the first one to the dance,” he said.

He also encourages cooks to take liberty with his recipes, saying, “There’s not one way to play the song.” But he has embraced gluten-free options and organic foods, especially after the death of his younger sister.

Morgan Fieri died of skin cancer in 2011 — she is memorialized with a color tattoo on his left arm — and she pushed him to come up with delicious meals while juggling severe dietary restrictions. “It really opened my mind. I think it was the last gift she gave me. It changed me as a chef,” he says.

With the holidays coming up, Fieri hopes to spend time with his family — wife Lori and their two sons — and he had this advice about big meals: slow down, put the phones away and have lots of courses.

“I say to folks all the time, ‘Watch what you’re eating. You don’t have to eat it all. Make conscious choices. It doesn’t mean you have to starve yourself and eat carrots all day,'” he said. “Have an awareness.” Mark Kennedy, AP Entertainment Writer