Food & Beverage | Thanksgiving is a chore, even with Martha Stewart’s help 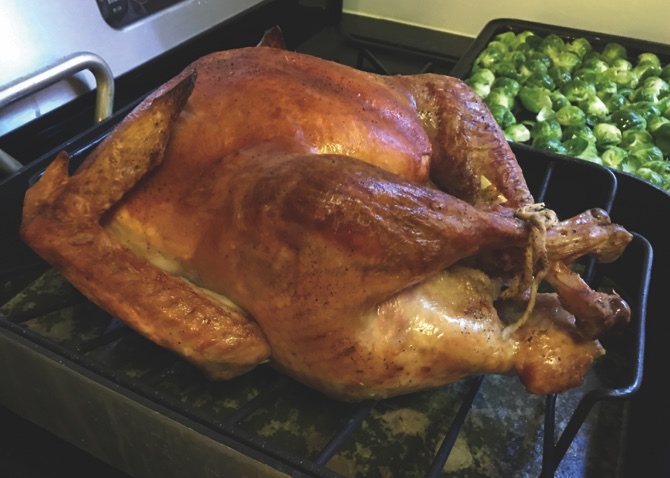 Even for the best home chefs, Thanksgiving is a lot of work.

And whether you’re hosting friends or family, it’s a pressure cooker of a feast. Dry birds and burnt stuffing have a way of turning into tales told long after the plates are cleared.

Martha Stewart is here to help. A meal-preparation company she’s lent her name to, Martha & Marley Spoon, will send you recipes and all the ingredients you need for a decadent Thanksgiving feast.

Unlike packages offered by many supermarkets and restaurants, you still have to do your own cooking (watch me do it here: youtu.be/XY5TMdcFhdw). And we’re talking about a complete feast for eight to 10 people, unlike rival services that just do sides or focus on quick meals for couples. Martha Stewart’s package is rare in offering an all-inclusive meal you make yourself.

But these aren’t your grandma’s recipes. The meal might feel like restaurant cooking, even though you did all the work. You sacrifice tradition, though you save time and avoid agony fighting crowds during what would probably be multiple shopping trips.

WHAT’S IN THE BOX?

Martha & Marley Spoon sent me a package to try out. The Associated Press picked up the tab for it, and I hosted an early Thanksgiving dinner with family and friends. I found the price reasonable, compared with what I’d pay buying all the ingredients individually. The package costs about USD180, or $120 if you provide your own turkey. There’s even enough for leftovers.

The package comes with everything you need to make mashed potatoes, gravy, roasted Brussels sprouts, stuffing and apple pie. There are no shortcuts, like a premade pie crust or bread cubes for stuffing. Everything’s from scratch. 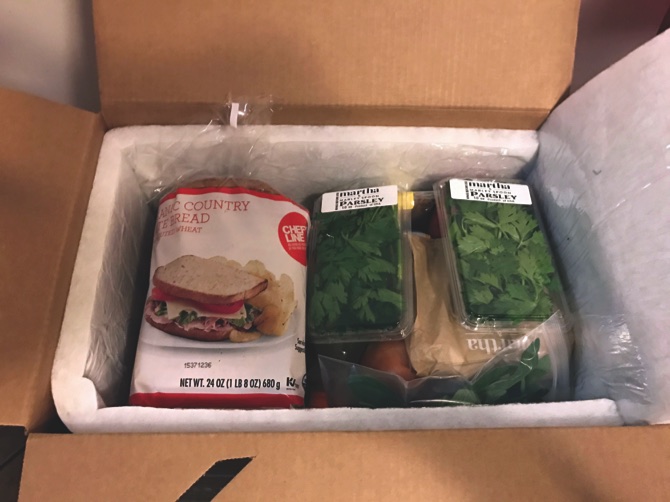 The turkey is frozen, so if you ordered one, the company will send it out about a week before Thanksgiving to allow time for thawing (my 12.5-pound bird took about four days to defrost). A separate box for the side dishes will arrive just a few days before the feast.

That’s not a lot of time, but you don’t want to get fresh veggies too early and have them go bad before you cook. The company will email you tips for getting parts of the cooking done ahead of time, but there’s no substitute for good planning and organization, just like every other Thanksgiving dinner.

I found the recipes easy to pull off. They are written clearly and include helpful photos.

But it still took a full day to make everything. I peeled and chopped and sauteed for hours. And I had to open that nasty bag of turkey guts tucked inside of the bird, fish out the giblets and make a stock for what would eventually become tasty gravy.

For me, the biggest challenge was getting everything in and out of the oven in time for dinner. The turkey, apple pie and two of the three side dishes needed to bake at some point and at various temperatures.

When it was all over, I was exhausted and still had a feast to host. Do as much as you can the night before, then enlist your family and friends to help. Even a simplified Thanksgiving is too much work for one person.

The downside of simplified recipes is that when you cut out ingredients and steps, you cut out the “wow” as well. Advanced cooks might find themselves wanting to doctor the recipes a bit.

Some of the dishes, including the turkey, tasted underseasoned. The apple pie was a big hit, but could have used a liberal dose of cinnamon. And while the mashed potatoes were over-the-top rich, they were still bland.

The notable exception was the stuffing, which was packed with onion, celery, fresh parsley, sage and dried cherries. And while I’m generally not a fan of Brussels sprouts, or mustard sauces, several of my guests said they enjoyed that dish as well, pointing to its bright flavors.

This might be a good option for rookie cooks looking to host Thanksgiving for the first time, without cheating and buying everything premade.

But if your family is wedded to certain traditional dishes and cooking methods, you might feel sad — or end up visiting the grocery store anyway to add your favorites to the feast. 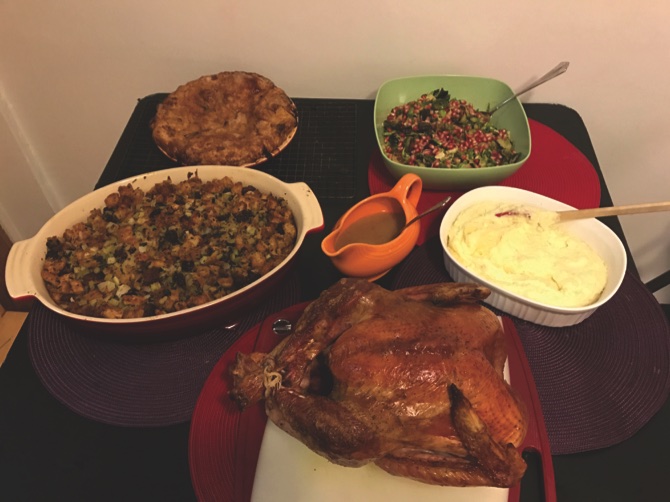 Food from a Thanksgiving dinner from Martha & Marley Spoon

I missed the sweet potato dish I make every year. I also missed my Louisiana-native husband’s fantastic fried turkey. And my family would riot if the meal didn’t include cranberry sauce and pumpkin pie.

Even the least picky cook is going to need to add a few things. The pie cries out for ice cream, and you might want bread for the table. Simple appetizers would be good as well, along with lots of wine. But these are things your guests can bring.

In the end, does it really matter? Isn’t Thanksgiving more about the people you’re with, rather than what you eat?