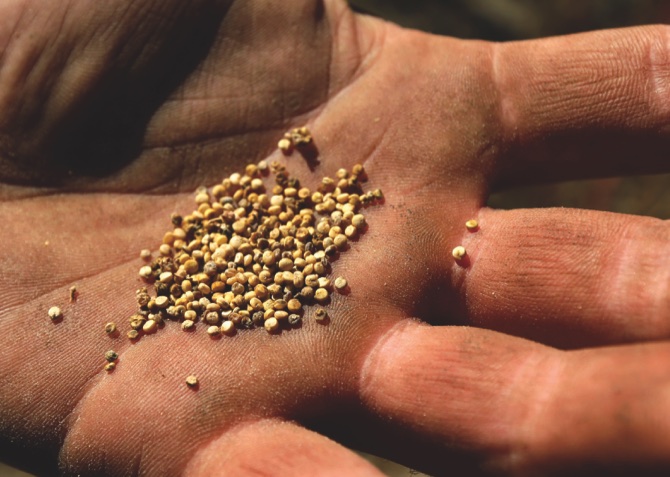 To the south of Nash Huber’s farm fields are the Olympic Mountains, peaking at nearly 8,000 feet. Due north is the end of a channel of Pacific Ocean waters that separate the United States from Canada.
Yet in this corner of the country is where the 75-year-old Huber hopes the South American grain quinoa takes root.
Last month, Huber harvested quinoa commercially for the first time on about 30 acres, making him the latest addition to a small number of U.S. farmers trying to capitalize on American eaters’ growing demand for the Andean grain.
“It’s a beautiful crop,” Huber said as he surveyed his combine grinding the plants and spitting out the seeds. He chose a variety called Redhead, which turned his field lipstick red for a couple of weeks before harvest. “We’re still learning. I kind of stepped off the end of the dock here with a bit of a bite this year.”
Americans consume more than half the global production of quinoa, which totaled 37,000 tons in 2012. Twenty years earlier, production was merely 600 tons, according to the United Nation’s Food and Agricultural Organization.
Yet quinoa fields are so rare in American farming that the total acreage doesn’t show on an agricultural census, said Julianne Kellogg, a Washington State University graduate student monitoring quinoa test plots around the Olympic Mountains, including one next to Huber’s field. A rough estimate puts the country’s quinoa fields at 3,000 to 5,000 acres.
Quinoa’s nutritional punch has pushed the grain beyond health food stores and into general consumption, propped up by celebrities like Oprah Winfrey.
It has all the amino acids humans need, making it a complete protein, Kellogg said. That’s hard to find in grain crops, she said. It’s also gluten-free.
The grain’s future is marked with possibilities, including milk, beer, cereals, hair products, snacks products well beyond the salad bar.
“I think we’re witnessing the start of a staple,” said Sergio Nuñez de Arco, a Bolivia native whose company, Andean Naturals, has been instrumental in bringing quinoa north, distributing to Costco, Trader Joe’s and others.
The spike in demand from the U.S. and Europe led big farm operations in Peru to enter quinoa farming a few years ago. That resulted in an oversupply, and prices have been falling.
According to a July report from the U.S. Department of Agriculture’s Foreign Agricultural Service, quinoa prices plummeted about 40 percent between September 2014 and August 2015.
“Farmers are rotating out of quinoa,” Nuñez de Arco said. “They went back to the city to look for work. It was good while it lasted, so it’s back to rural migration.”
Nuñez de Arco has opened a California processing plant for the bitter coating that covers the quinoa grains. It wasn’t welcome news for his Bolivian farmers.
“There needs to be some improvement to practices and they’re gonna get that through some healthy competition,” said Nuñez de Arco, now based in San Francisco. “My push has been to protect the smaller farmer in a top-shelf niche, where they will have the demand.”
In Washington state, Huber’s quinoa will head to Lundberg Family Farms, a California-based company that has been a leader in domestic quinoa production. This year, Lundberg and its network of contracted farmers along the West Coast hope to harvest 2 million pounds of quinoa.
“It’s great to have product available where folks are consuming it,” said Tim Schultz, vice president of research and development at Lundberg. “You have less food miles on it.”
For more quinoa to grow in the United States, farmers and researchers must find the right mix of varieties and environments. The Washington State University plots are testing varieties for heat resistance and late-summer sprouting, among other benchmarks. Next year, they’ll test plots in Maryland and Minnesota.
“From a farmer’s perspective, it’s more options for rotations,” said Kevin Murphy, an assistant professor at the university.
That’s an option that attracted Huber. Quinoa represents his first commodity crop. On a harvest day, he eyeballed a lower yield than he wanted, in part because the elk that roam the nearby woods frolicked in the quinoa fields.
“I hope I break even,” he said with a laugh. “If we break even or make a little bit of money, that’ll be good because I learned quite a few things here.”  Manuel Valdes, AP 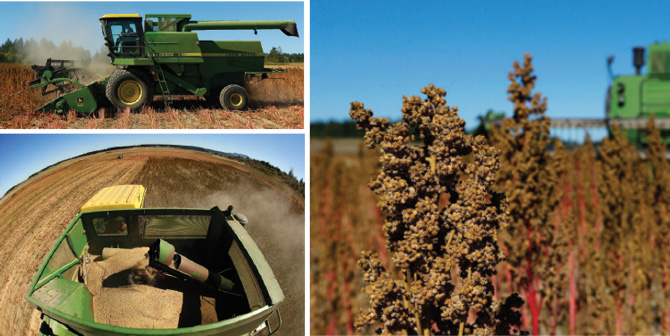