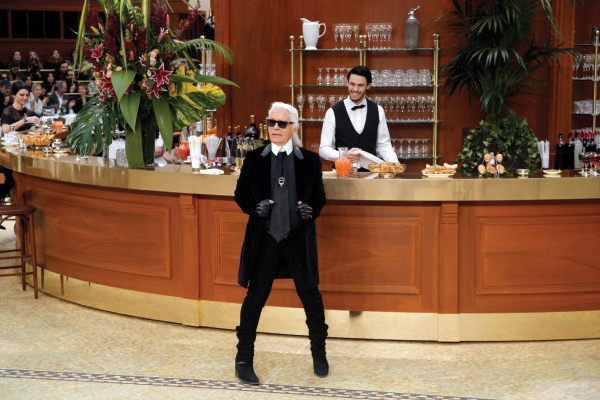 Karl Lagerfeld was caught moonlighting as a barman at “Brasserie Gabrielle” in Paris this week — but never fear, Chanel’s couturier hasn’t given up his day job.
The 81-year-old workaholic designer was merely posing for the press at the giant French brasserie he recreated inside the Grand Palais for Chanel’s latest ready-to-wear display.
And what a fall-winter show it was.
French waiters walked with silver platters past brass champagne bars, bistro tables, newspaper stands with “Le Figaro” and huge revolving doors. The models, led by Cara Delevigne, soon followed in long, colored textured jackets, on-trend pencil skirts, ‘60s check dresses, embroidered parkas and revamped vintage Chanel block heels.
It was a relaxed affair, with some models even taking the time to chill at tables marked “reserved.” The realism of the set was astounding with its coffee machines and “no mobile phones” signs — and even, said the designer, down to the fact that the models just had coffee.
“No, of course they didn’t eat, or they’d put on weight,” quipped Lagerfeld.
His designs showed off outstanding details. The black-and-white ‘50s block shoe — a black toe on a thick square heel — defined the show, a look that Lagerfeld resurrected from the Coco Chanel archive for the first time ever.
There were several fantastic plays on the “penguin”-like French waiter and French maid uniforms ubiquitous among Paris’ posher restaurants.
A black menswear jacket came with a bowtie and a voluminous white silk ruffled skirt. Elsewhere, white waiters’ bows were abstract and embroidered on a loose, diaphanous skirt.
There were also several menswear looks, sometimes on male models, in loose pants and textured bombers with colored buttons.
“Don’t forget Chanel took much of her inspiration from men’s clothes,” said the designer.
Everybody knows that Lagerfeld is among the most hardworking artists in fashion — these 97 looks were testament to that — so it was ironic that he doesn’t have time to go to the type of restaurant that he recreated Tuesday.
“I have no time to have lunch,” he said. AP