Gov’t to run another – shorter – round of mass NAT 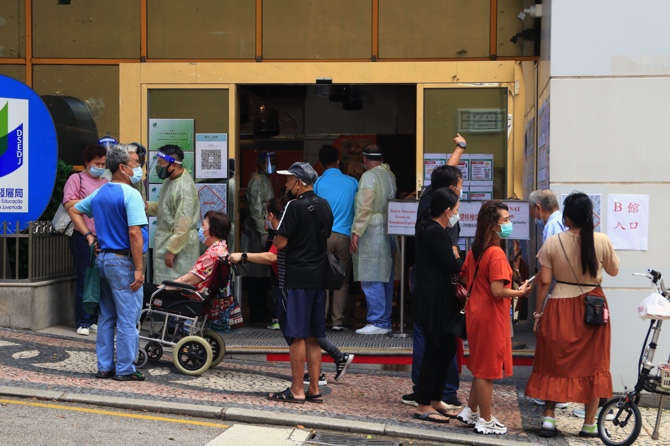 The city will see another round of mass SARS-CoV-2 nucleic acid testing (NAT), in a shorter timeframe, from 9 a.m. today, a local health official announced yesterday.

At the regular health press conference, pulmonologist Alvis Lo, director of the Health Bureau (SSM), announced that the government will run another round of citywide NATs. This round will be completed in 39 hours, finishing at 12 a.m. on June 25.

Directly after its release, the announcement attracted a staggering amount of criticism on social media and in various chat groups.

Yesterday, the entire city was required by the SSM to undertake a SARS-CoV-2 rapid antigen test (RAT).

In this round of mass NATs, there will be 53 sample collection stations: 32 common stations, 14 stations for paid tests, and seven stations for special-needs groups. Priority lanes will be set up at all common stations to cater to children under age three, elderly above age 70, disabled and pregnant individuals. These persons may be accompanied by a carer.

All test subjects at any common stations will need to make prior bookings. They will not be tested before or after their booking time.

The main difference in this round of tests is that stations for special needs groups will operate common stations between the hours of 1 a.m. and 5 a.m. Non special-needs groups will be allowed to book at such stations during these hours.

This move is understood to reduce the duration of the mass NAT.

Before the end of the press conference, Lo recommended all people take a RAT prior to their departure for the mass NAT. However, he emphasized that it is not a mandatory requirement. “Even if you can’t do [the RAT], our stations will not bar you from entering,” the health official emphasized.

Yesterday, the Macao Government Tourism Office also announced that an unopened hotel, the England Marina Club Hotel, located next to the Broadway hotel in a real estate complex, will serve as a new quarantine hotel to accommodate people with positive NAT results.