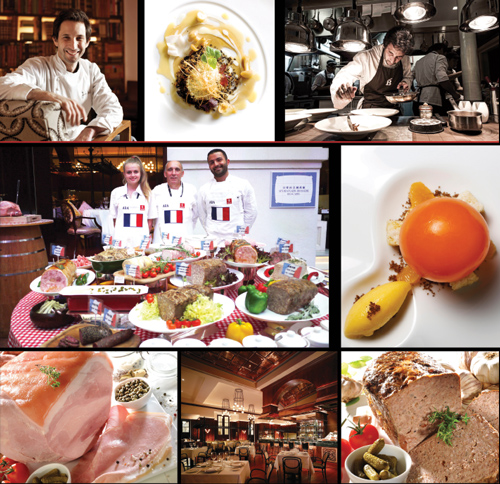 From the 25th to the 28th of July, Vida Rica Restaurant at Mandarin Oriental is featuring creations from guest chef, José Avillez, of the Michelin-starred restaurant Belcanto in Lisbon, Portugal. Considered one of the most recognized Portuguese chefs, José Avillez is renowned for haute cuisine that combines traditional and avant-garde elements.
Having worked in the kitchen with some of the world’s most distinguished chefs such as Alain Ducasse, Eric Frechon and Ferran Adrià, Chef Avillez was invited, in 2008, to the post of head chef of Tavares in Lisbon, where in little more than a year he was awarded his first Michelin star.
Early in 2011, Chef Avillez left Tavares and set out to establish his own gastronomic business, Belcanto, which opened at the beginning of 2012 and won him another Michelin star within a year of opening. A popular author, TV cooking host, caterer and wine maker, he now has five restaurants in Lisbon offering different culinary experiences.
Food aficionados and fans of Chef Avillez are invited to relish a six-course degustation dinner at Vida Rica. Highlights include an impressive amuse bouche featuring Port wine tonic, olive in three ways and foie gras crusted with roasted hazelnut, as well as his signature dishes such as slow cooked golden free range chicken egg with mushroom and black truffle jus and Sao Jorge Island’s cheese sauce, sea bass cooked in fragrant seafood broth and seaweed, and a special “mandarin” dessert.
Other remarkable dishes include Portuguese shredded codfish with fried potatoes, scrambled egg and explosive olives, and egg tart mille feuille with cinnamon ice cream.

This July, Jacques Dureisseix, a senior butcher from the famous La Charcuterie Bordelaise in Bordeaux is invited to collaborate with its second-generation owner, Margaux Chedhomme, at Aux Beaux Arts of MGM MACAU, presenting an irresistible parade of French terrines, galantines, pâté and charcuterie. Guest will be able to savor pâté from Les Landes with Cepes, Pheasant and Foie Gras Galantine, Pork and French Lard terrine, and Morteau sausage, all displayed on a huge wooden table.
From the region of South West France, Charcuterie Bordelaise produces authentic cooked meat products and perpetuates the traditions of the trade, creating recipes using branded products and improving the expertise of chefs and pork butchers devoted to quality. Well-known for his incomparable knowledge of meat and butchery and acknowledged by institutions such as Interbev, Dureisseix has been in the French meat industry for 14 years. As an ambassador of Charcuterie Bordelaise, Chedhomme possesses in-depth knowledge of the meats and butchery industry, often visiting top international restaurants around the world.