HIS warns biosecurity cannot be left out of national security education 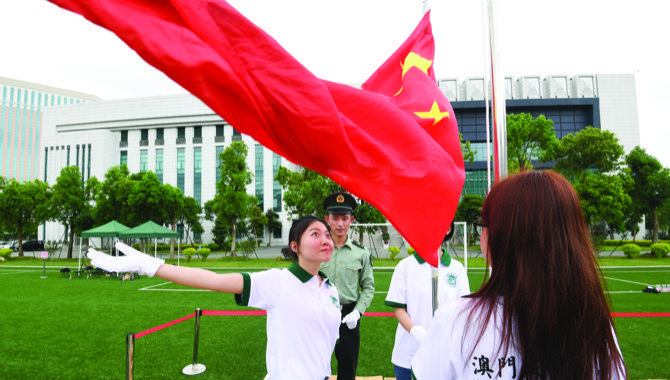 Chief Executive Ho Iat Seng (HIS) said today (Wednesday) that the novel coronavirus had shown that biosecurity matters can leave a lasting impact on the livelihoods of the population and therefore needed to be included within Macau’s national security framework.

“The country’s general security is directly related to the stability of the residents’ lives and the future development of Macau,” said Ho, according to the prepared remarks released by the Macau government.

“Biosecurity is also crucially associated with the life and health of the people,” added Ho.

He said that the arrival of the novel coronavirus had bought “great challenges” to the Macau government and its resident in terms of defending the general security of the state. However, “despite the influences of [Covid-19], Macau will continue its steps this year in terms of raising awareness and education on national security.”

The Chief Executive also said that the Covid-19 pandemic had demonstrated that biosecurity issues can have a profound and lasting effect on the stability and security of the city. Accordingly, the country has decided to integrate biosecurity into the national security framework and will study the relevant institutions, systems and mechanism, to address future biosecurity matters.

“In the face of this public health crisis, the most important thing is to ensure the health and safety of the residents’ lives,” he said.

Ho said that the defense of national security is a duty and responsibility on the part of the entire Special Administrative Region and all residents of Macau. The city must work to reinforce national security education, especially among certain groups, including the youth.

“It is necessary to reinforce the level of residents’ awareness of national security, especially among the body of civil servants and young people,” he said, adding that these two groups of people must attain a solid grasp and understanding of the ‘one country, two systems’ policy framework.

Since 2018, the Macau government has developed publicity and educational campaigns on national security to help educate the public on the matter.

According to Chinese President Xi Jinping, national security promotion involves co-opting the civilian population to fulfill their patriotic duty and be on the lookout for anything that could undermine the country’s stability. The president previously outlined that “national security is of paramount importance for the people to live and work in peace and for realizing the Chinese dream of national rejuvenation.”

Ho said this week that his government has “studied and seriously reflected” on the words and spirit of Chinese President Xi Jinping during his visit to Macau in celebration of the 20thanniversary of the handover, which had also underlined the importance of national security.