Marceau to shoot next ad campaigns for The Parisian 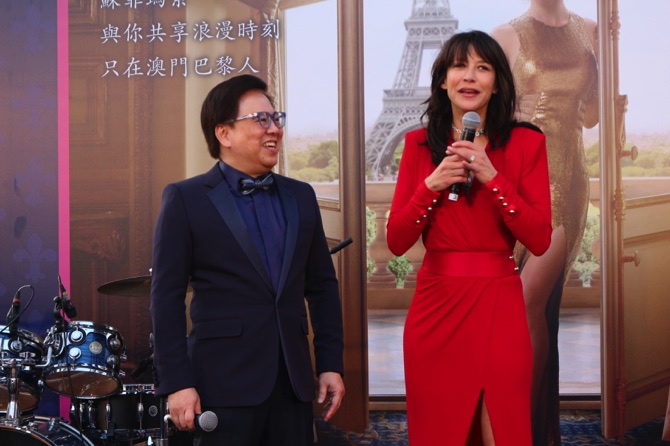 French actress, director and The Parisian Macao ambassadress Sophie Marceau is back in the region to shoot her next series of property advertisements.

The Parisian Macao hosted a celebration yesterday at its Eiffel Tower replica, titled “A Spontaneous Celebration with Sophie Marceau.”

Ninety-nine selected couples from Macau and Hong Kong attended, including The Parisian Macao Facebook fans who had registered online to receive an invitation.

Nine of the couples posed for individual photos with the French actress and director.

Guests also had the chance to win prizes such as romantic dinners at one of The Parisian Macao’s restaurants or spa treatments. The grand prize, an overnight stay in one of the hotel’s suites, includes a Le SPA’tique spa treatment for two, as well as dining and shopping vouches.

All guests received a special edition “love lock” to be attached to the bridge of the resort’s Eiffel Tower, following the Parisian tradition of couples leaving such locks on the Pont du Arts bridge.

Sophie Marceau is one of French cinema’s most recognizable actresses, and has been working in the film industry since the 1980s. She has won awards at the César Awards and the Montréal World Film Festival, among others.  LV