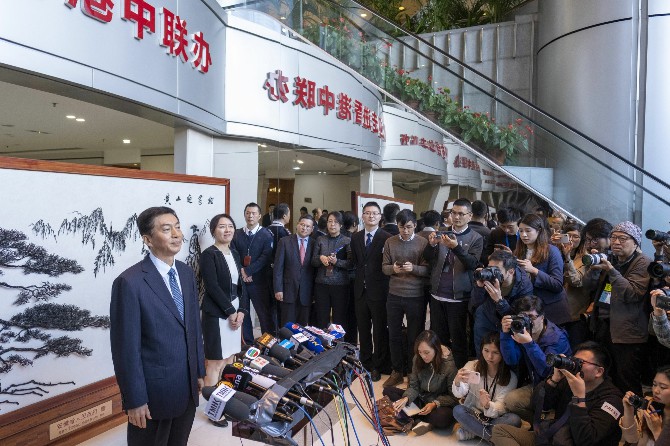 Luo Huining, director of the Liaison Office of the Central People’s Government in the Hong Kong Special Administrative Region, stands during a press conference

China’s new top official in Hong Kong said he is certain the city will stabilize following months of political unrest, backing leader Carrie Lam and her administration in his first public comments since being appointed.
“I am fully confident about this,” Luo Huining, the new director of the Hong Kong Liaison office, said at a media briefing yesterday. “Everyone fervently hopes that Hong Kong can get back on track. As President Xi Jinping said in his New Year’s address, without a harmonious and stable environment, how could there be a peaceful home? I sincerely wish Hong Kong and Hong Kongers well.”
The installation of Luo, a Communist Party stalwart known for faithfully executing Xi’s anti-corruption campaign, signals Beijing’s intention to restore law and order after nearly seven months of political unrest. He takes over from Wang Zhimin, the Chinese government said in a Saturday statement that didn’t elaborate on the move.
Luo served as party secretary in China’s Shanxi province until November, and became deputy chairman of the financial and economic committee of the powerful National People’s Congress last month. While Chinese media has credited him with enforcing the central government’s campaign to purge corruption and weed out disloyal officials in Shanxi, he has no direct experience in Hong Kong.
“Luo seems to have had the experience to end chaos and restore stability in Shanxi,” said Victoria Hui, associate professor of political science at the University of Notre Dame. “Since the outbreak of anti-extradition protests, Beijing has been trying to rein in Hong Kong.”
“It’s not clear why a strongman like him was not picked earlier,” she said.
Chinese and Hong Kong officials have frequently been caught off guard by developments during the unrest. Communications between Beijing and Hong Kong are mainly conducted through the Liaison Office, which was established in 2000 to replace the New China (Xinhua) News Agency, Beijing’s unofficial representative during the British colonial era.
The Liaison Office, which reports to China’s State Council, is a powerful but mysterious institution that represents Beijing’s interests in the former colony. A former head of the office’s research department wrote in 2008 that the office’s staff, as well as other mainland officials working on Hong Kong issues, constitute a second “governing team” that functions alongside Hong Kong’s formal government. The office also helps supervise Chinese state-owned enterprises in the city and manage media and real estate holdings.
Speculation about Wang’s removal had been growing, particularly after pro-government candidates suffered a resounding defeat in Hong Kong district council elections in November that reportedly caught Beijing by surprise. While the polls were for the lowest rung of the city’s government, the results amounted to a public rebuke of Beijing.
Chief Executive Carrie Lam said in a statement Saturday that she had worked briefly with Luo when he was running Shanxi and that she had “no doubt” that he would help promote “prosperity and stability” in Hong Kong. She praised Wang for serving during “unprecedented social unrest” and “providing staunch support” to the city’s government.
Wang’s dismissal “was long predicted because he appeared to be associated too closely with pro-Beijing elites and business leaders, without reaching out widely to all social sectors,” said Sonny Lo, a Hong Kong-based academic and political commentator. Wang’s “miscalculations” may have led to his downfall, particularly following the elections, Lo said.
Despite consistent backing from Beijing, Lam has seen her popularity tumble over months of often-violent protests that show no signs of abating. The unrest has rattled Hong Kong’s tourism and retail sectors and risks undermining its reputation as a global business center. Protests continued Sunday as dozens of people were arrested in the Sheung Shui district after an approved march, and police said they fired tear gas in response to a petrol bomb attack on a local train station.
“Luo’s appointment probably signals a hard-line policy from Beijing – that we don’t give a damn about your feelings,” said Chen Zhao, co-founder of the Montreal-based research firm Alpine Macro. “He’s just a party boss – he has no connection with Hong Kong and no foreign affairs expertise.” Whereas Wang knew Lam well, he said, “Luo has no relationship with the business community or political arena in Hong Kong.”
Luo’s appointment follows Xi’s New Year’s Eve defense of China’s system of governance over Hong Kong – an unusually high-profile acknowledgment of the city’s political turmoil. Natalie Lung, Iain Marlow & Cathy Chan, Bloomberg