Sum of all fears still can’t dispel speculation about inflation 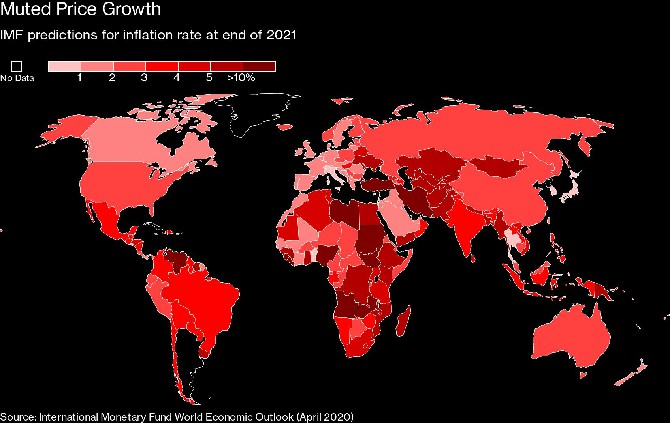 Even a calamity of disease, death and economic destruction afflicting the world all at once isn’t enough to suppress the notion in some quarters that inflation could return with a vengeance.
The coronavirus crisis has killed hundreds of thousands, incapacitated millions and affected the livelihoods of billions – prompting policy makers to fear a deflation spiral reminiscent of the Great Depression. But economists including former Bank of England official Charles Goodhart, and investors such as BNP Paribas Asset Management, are asking if a different phenomenon lurks in the wreckage of global growth.
Such contrarians wonder if an environment of ultra-loose monetary and fiscal easing, commodity shortages, frayed supply chains and braking globalization might be fertile ground for surging consumer prices. Reinforcing that shift, monetary authorities could face pressure to keep interest rates low, capping the cost of servicing ballooned government debt while allowing inflation to erode it too.
Even some traditionally deflation-wary thinkers have begun pondering that outcome. Former International Monetary Fund Chief Economist Olivier Blanchard recently wrote that high inflation is “unlikely but not impossible,” a sentiment echoed by former European Central Bank policy maker Peter Praet.
“I wouldn’t say that it’s a given that we’re going to be in a longer-term inflationary environment,” said Karen Ward, chief market strategist EMEA at JPMorgan Asset Management. “But I wouldn’t say it’s going to be a negligible probability either.”
A limited dose of inflation might be welcome to central bankers who have spent trillions of dollars over the years in stimulus to achieve that. But such a prospect is far from their minds at present as they try to help economies facing eye-watering increases in unemployment. Almost half of the world’s workforce is in danger of losing livelihoods from the crisis, according to the International Labour Organisation.
“The deflationary shock is dominating, that’s absolutely clear,” Praet said in an interview. “There’s a collapse of demand.”
Markets reflect that view, in tune with the oil slump and the prevailing perspective of weak prices sapped by adverse demographics, new technologies and globalization. Inflation expectations, as proxied by five-year, five-year forward swap rates, are near record lows in the U.S. and Europe. The U.K. 10-year breakeven rate is down nearly three quarters of a point below last year’s peak.
Some investors see things differently. BNP Paribas Asset Management, which oversees more than $450 billion, has started building an overweight position in commodities for the first time in four years, while going underweight bonds. Ardea Investment Management, a Sydney-based hedge fund, said it “materially” added inflation exposure from late March after the collapse in market expectations of price growth.
“In terms of tail risks not being focused on, inflation is definitely one of them,” said Gopi Karunakaran, a money manager at Ardea.
That narrative diverges from another argument over the years – for example from Germany’s Bundesbank – that underlying conditions in some economies have long supported a pickup in prices.
One strand emphasizes the synchronized stimulus – with monetary easing supercharged by fiscal largess – as opposed to the asymmetric response during the financial crisis, when central banks cut rates and started quantitative easing, but governments reined in budgets.
“What we are doing is creating a policy framework that has an inflation bias in it, which is the first time we’ve had that in generations,” said Dario Perkins, chief European economist at TS Lombard in London and a former U.K. Treasury official. “The policy response is a war-time policy response.”
That conflict theme is one that Goodhart finds apt. In a March 27 article with Manoj Pradhan, founder of Talking Heads Macroeconomics, he wrote that commodity costs will rebound with an economic recovery after lockdowns are lifted and stimulus takes effect. Inflation could exceed 5% in 2021, and perhaps even reach 10% – outcomes resembling the aftermaths of World Wars I and II.
“The monetary and fiscal expansion is aimed at, and will succeed at, putting money in the hands of people,” Goodhart, a BOE rate setter from 1997 until 2000, said in an interview. “There will be some degree of pent-up demand.”
Goods disruptions caused by the virus – for example with Brazilian farmers unable to harvest coffee beans – might also linger. Colin Harte, a multi-asset portfolio manager at BNP Paribas Asset Management, warns that the supply side “could be more damaged than we realized.”
The further consequences of a potential unwinding of globalization, and a renewed focus on local production, builds on that narrative.
“In the latter stages of the recovery, amid continued de-globalization in goods trade and less elastic global supply, fiscal policies may begin to stoke inflation,” Berenberg Senior Economist Kallum Pickering said.
Some economic data might already point to price pressures. U.S. money supply is surging, and Tim Congdon, a longtime watcher of such data, anticipates it will see its largest increase in peacetime this year – followed by an “inflationary boom.”
For some analysts however, the prospect of inflation is seriously remote in a world where unemployment is going through the roof.
“It is naïve to think everyone is going to get their jobs back when this pandemic virus goes away,” said Chris Rupkey, chief financial economist at MUFG Union Bank NA. “Massive job losses mean price declines for many goods are on the way.”
For Goodhart’s thesis of “double-digit” inflation to unfold, Perkins reckons authorities would need to succeed relatively quickly in limiting deaths and shoring up growth, which isn’t a given. He isn’t worried.
Blanchard, in an April 24 article for the Peterson Institute for International Economics, also sees a far greater probability of low inflation. But a combination of swelling public debt, a jump in real interest rates, and deliberately loose monetary policy to aid government financing, could produce a different outcome.
“It would be a dream scenario for politicians that at some point inflation goes up,” Praet said. “It’s not impossible. But I think the structural consequences of this shock go well beyond the simple narrative of a normalization, once we have a vaccine.” Catherine Bosley & Anchalee Worrachate, Bloomberg