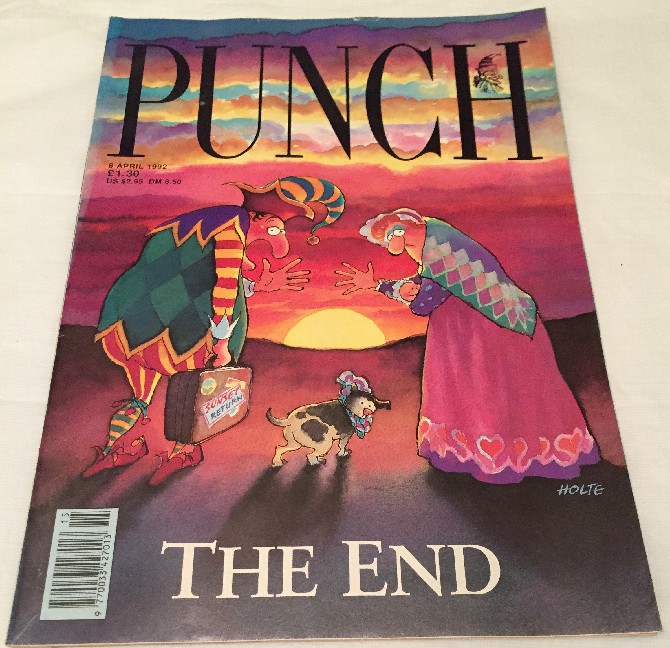 Punch, Britain’s oldest satirical magazine, is to close after suffering crippling losses of £1.5m a year.
The decision ends a publishing tradition dating back almost 151 years.
It is expected to publish its final issue on 8 April after circulation plummeted from highs of 175,000 sales in the 1940s to 33,000 in the present day.
Publisher United Newspapers Group, which also owns the Daily Express, made the announcement today and said it was beyond recovery unless another buyer is found.
UNG managing director Graham Wilson said he would continue searching for a buyer but would not reveal any likely candidates.
There have been many rumours in recent years Punch would fold.
A £700,000 campaign to promote the magazine during its 150th anniversary last year did little to boost flagging sales.
‘’We needed sales to go up by thousands but they only went up by hundreds,’’ David Thomas, the editor, said. ‘’We did our best but it just wasn’t enough.’’
Losses have been blamed partly on advertisers shifting to the rising number of colour supplements in weekend newspapers.
But its main failure is seen as not having kept up with the competition.
The magazine which once set the pace of political satire was outwitted in the circulation department by the racier Private Eye and the schoolboyish Viz magazine.
Ironically, its bid to keep up with these competitors also alienated traditional readers.
The magazine, which became a British institution, has carried articles by William Makepeace Thackeray and A. A. Milne as well as cartoons by the likes of Sir John Tenniel, the illustrator of “Alice in Wonderland”.
It was founded in 1841 in the back room of a pub in the Strand.
Mark Lemon, a brewery manager who wanted to become a writer, Henry Mayhew, a lawyer-turned-journalist and the noted engraver Ebenezer Landells decided to publish a new magazine.
It would combine humour, stylish illustrations, political debate and a social conscience with a fresh audacity which became its hallmark.

The old joke, “Punch is not as funny as it used to be – but then again it never was”, drew little laughs as it folded.
Four years later the Egyptian businessman Mohamed al Fayed brought it back to life.
He funded new exposés on the likes of Peter Mandelson, the architect of New Labour, and the media mogul Rupert Murdoch.
But eventually it was costing £40,000 per issue to produce with subscriptions at only 6,000 and Mr Al Fayed closed the title again in 2002.
A website still exists for the magazine, reported to have at one time refused articles by Charles Dickens, with many hoping it could make a comeback and regain its cutting-edge image.