11 arrested for illegal fishing on HKZMB 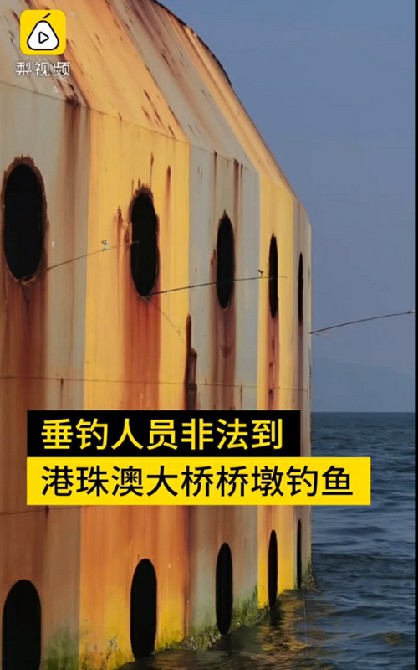 Eleven “fishing enthusiasts” were recently arrested for unauthorized fishing on a pier of the Hong Kong-Zhuhai-Macau Bridge (HKZMB). Twenty-six fishing rods and five foam boxes of fish have been seized by the mainland law enforcement authority.
The individuals conducted the act on a pier in the jurisdiction of Zhuhai.
Video footage shows fishing rods protruding from the steel boxes on the pier, exposing the group’s illegal actions.
Local authorities said that fishing seriously affects the navigability of the Qingzhou waterway, while posing a danger to the bridge and to the anglers.
As for how the anglers arrived at the pier, they chartered a boat that took them there. It took two boat trips to bring them all to the pier.
According to the relevant provisions of the Public Security Administration Punishment Law, the public security entities imposed a five-day administrative detention on the boat operator and fined him 500 Chinese yuan, on top of confiscating his illegal income of 500 Chinese yuan.
The 11 anglers, on the other hand, were given only a warning as this was their first violation and because of their cooperation with the investigation.
Law enforcement officials stated that, in accordance with the relevant provisions of the Law of the People’s Republic of China on Public Security Administration Penalties, if a ship enters or docks without authorization in waters or islands that are prohibited or restricted by the country, the person in charge of the ship and the responsible persons will be fined 500 to 1,000 Chinese yuan, in addition to being detained for up to five days. AL